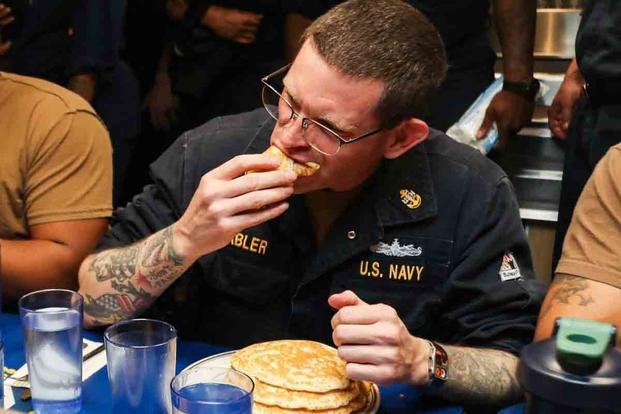 All veterans day is a tactical Thanksgiving, a time of year when American restaurant chains open their doors to offer free food to veterans. Any veteran looking to make the most of these offerings should turn to the experts for advice, just as they would when training for a mission. When it comes to stuffing yourself crazy, there’s no better source than competitive eaters.

Competitive eating may be a joke to some, but for champions like Molly Schuyler, Joey Chestnut, or Jamie “The Bear” McDonald, it’s a record-breaking, profitable lifestyle.

Yet, like all great competitors, they have to train. While veterans may not be competing in Chacho’s Taco Eating World Championship, these tips could help them get through Applebee, TGI Friday, and Red Lobster on the same day.

1. Train your stomach to grow.

Veterans Day week might be a bad time to start training, but it’s never too early to start next year. The first step is to teach your stomach to handle more and more food before telling your brain it’s full.

Competitive eaters do this by drinking increasing amounts of water over short periods of time. A scientific medical journal described the process as turning the stomach into “an enormous flabby sac capable of accommodating huge amounts of food”.

This is an area where most military personnel have a head start. Many competitive eaters note that their ability to store competing food can vary depending on how much body fat they are carrying. As a result, most world champions aren’t obese at all; many are actually in good shape.

Behind it is the “belt of fat” theory, a purely anecdotal theory that posits that belly fat will limit the stomach’s ability to expand. Many competitive eaters maintain a strict diet and exercise program when not training or competing.

Like any athlete, competitive eaters need to work certain muscles longer, faster, and more efficiently than other humans in normal life. This takes practice, especially the parts of the eater’s body that will do the most work: their mouth. It takes hard work to consume 63 hot dogs in 10 minutes, the pace that won Chestnut the 2022 Nathan’s Hot Dog Eating contest.

Eaters will work these jaw muscles by practicing chewing, often on the same silicone tubes used by patients recovering from jaw surgery. They will also chew unnatural amounts of gum, up to 20 pieces at a time.

There are actually certain positions that can compress the stomach or otherwise limit the amount of food your body can take in before telling the brain “Game over”. One of the most obvious ways to compress the stomach is to sit down, which is why most true competitive eaters stand up during competition.

Standing also makes it easier to breathe, which is important when stuffing your face for 10 minutes straight. Some competitive eaters will also occasionally jump up to keep food moving and avoid choking hazards.

This does not mean minimizing the amount of water you drink. Liquid is actually an important part of competitive eating. Your body won’t produce enough saliva to lubricate 28.5 gyros in 10 minutes, but the fluid takes up space, so you need to use it efficiently.

Matthew “The Megaton” Stonie prefer warm PowerAde, as cold water can tighten your throat muscles. No matter what liquid you use, some contests prohibit drinking liquids, but allow moistening food with water. Learning to use liquid appropriately is therefore an important skill.

When you try to eat 430 wings in 30 minutes, as the eaters do at the Philadelphia Wing Bowl, that means putting away at least 14 wings per minute. Basic veteran training programs for eating fast, but not efficiently. Competitive eaters have evolved a series of eating methods that allow them to ingest food at a rate that can best be described as “efficient” and, at worst, “ungodly.”

Takeru Kobayashi created the Solomon method of eating hot dogs, which involves breaking the dog in half and grinding it with its molars while swallowing a moistened bun and moving the next glizzy into place. Arnie “Chowhound” Chapman uses a similar method with pickles which he dubbed “the shredder.”

No matter how you spend your Veterans Day, whether it’s casually eating like a normal person or buzzing in free Veterans Day food like a competitive eater on speed, be safe, have fun and tip the service staff. Remember: you are representing all veterans on this day.

— Blake Stilwell can be reached at [email protected]. It can also be found on Twitter @blakestilwell Where on Facebook.

Whether you’re considering joining the military, seeking a post-military career, or keeping up to date with military life and benefits, Military.com has you covered. Subscribe to Military.com to get military news, updates and resources straight to your inbox.