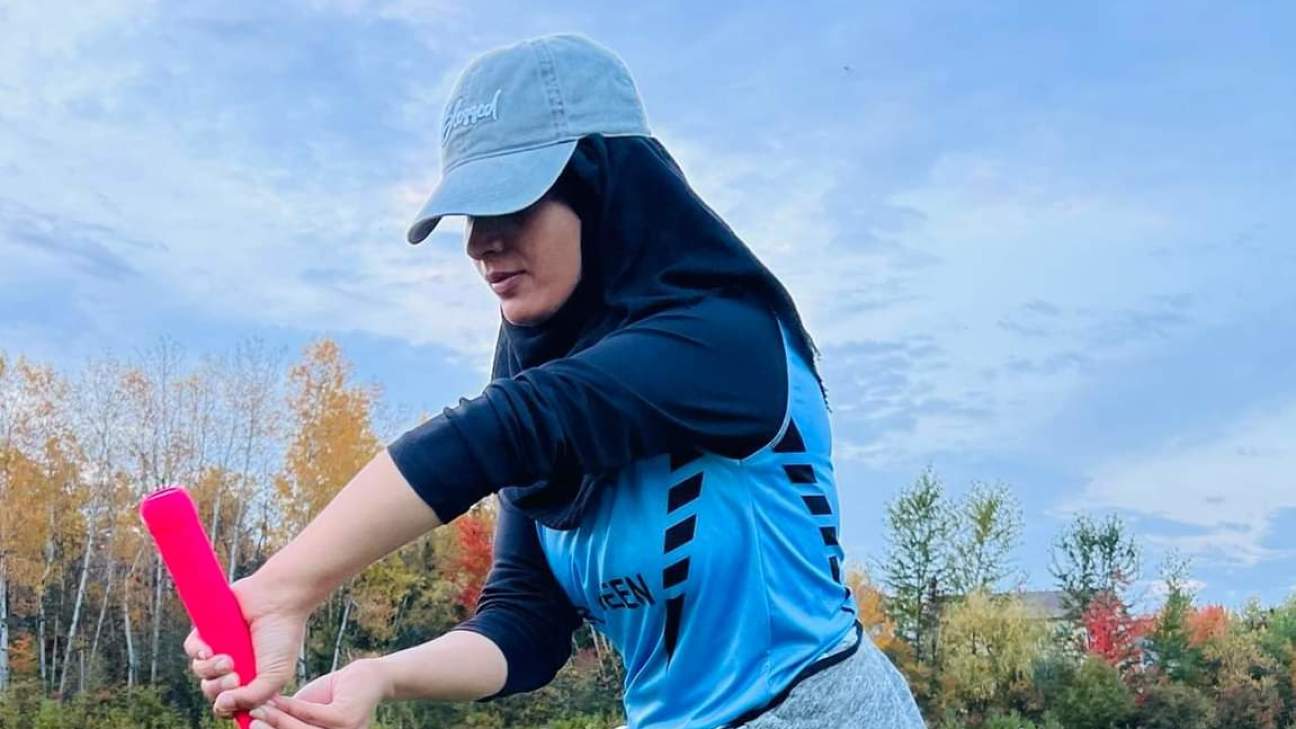 His avatar, so to speak, turned out in an Afghan shirt, with his name, a number and the Afghan flag on it, for an e-sports competition which was an act of protest against the fact that there is no no real national federation of Afghan women. team. They played Australia in a virtual Women’s World Cup final and lost, as did every team that faced Australia in the real tournament.

But it wasn’t about the result at all.

“Everyone who played this game showed they were with us,” Samim, 28, told ESPNcricinfo from his home in Canada. “It’s like a candlelight protest, but instead of lighting a candle, it’s playing cricket. And it reminded people that we are here. We exist. I can’t play on the home ground but I played virtually, and when I see that, I’m just proud of myself that ‘Yes, I was in the Afghanistan team’.”

Samim became interested and involved in cricket as an adult, playing with her siblings despite raised eyebrows from those in their community, who said “cricket is not for you [girls/women]”. Mostly they played indoors in their home in Afghanistan, but found like-minded enthusiasts and in 2019 began campaigning for a professional women’s cricket organization. At the time, Samim was working as a math teacher, but “hoped that cricket might become my career”.

As of November 2020, the Afghanistan Cricket Board (ACB) was convinced enough to put in place contracts for 25 women, with the intention that they progress slowly to competitive matches.

Although the board advised that it would take time to get a female team on the park, given the cultural and traditional norms in Afghanistan, Samim has seen attitudes change around her.

“There were people who accepted us, liked us and said we could do it,” she said. “There were those who allowed their daughters to go to school, go to cricket and play other sports. It was becoming acceptable.”

Boosted by the pockets of support they got, the group of Afghan women trained as hard as they could. “We had professional coaches – the men’s international team coaches, they also coached us,” Samim recalls. “The ACB provided us with camps and three or four days of training in a week. We had two teams and we played against each other. We professionalized.

At that time, there was talk of organizing matches against Oman or Bangladesh but that never came to fruition. In fact, nothing helped. “Not even six months of our contract was over when the Taliban came and everything was destroyed.”

The political takeover of the Taliban in Afghanistan began in May 2021 and intensified in August. Within a week, they claimed Kunduz territory in Kabul and it was during this time that Samim decided she needed to reconsider her options.

“At the time, the Taliban had more than two provinces and the big city of Herat. We were just scared. not leave,” to which she replied, “No, I can’t guarantee that, and the situation is not good for the girls, so you should leave. That’s when we left Kabul,” Samim said. “Three days later, the Taliban took [over] Afghanistan. We were in a hotel and my teammates called me and they cried.

“Everything – every dream, every wish, every hope that me and my teammates had – was gone. It was such a bad situation. When I remember now, I just want to cry.”

While many of Samim’s teammates remained in Afghanistan, she arrived in Canada with “only two clothes”. Her brother and two sisters joined her, but she had another brother in another country. She had to adapt to a lot of things including the “completely different weather”, and has just come through a winter with “lots of ice and lots of snow” as well as the loss of her cricketing and professional career.

Samim tells how difficult it was for women in Afghanistan

“It’s really hard to explain how my life is. In Afghanistan I had a good career and I had other things. I had friends and my team,” she said. “When people saw me they were proud of me. Here I had to start from scratch. But I started because I feel I’m so strong, I can take anything. I have friends , I started playing cricket, I started I have a lot of friends Everything is normal Well I want to pretend it’s normal.

Samim quit teaching and is now a settlement worker who aims to help other refugees. She laments the loss of learning opportunities for women in Afghanistan but hopes to keep the conversation going by talking about it.

“When I heard the Taliban wouldn’t allow girls to go to school and I wasn’t in Afghanistan to oppose it, I just cried,” she said. . “I can’t do anything. It’s so difficult, because education – especially women’s education – is really important for any country. If you want to change the future, you have to have the women’s education. It’s really hard to see that we’ve completely lost our country. It’s really hard but there’s nothing we can do. I just raise my voice like that.

Likewise, she also keeps her cricketing ambitions burning and has found a place for it: Fredericton Cricket Club in New Brunswick. She hopes it will open doors for her to play elsewhere – including franchise leagues – and appeals to anyone who has the opportunity to provide it.

“Every little chance given to us as cricketers, we will be happy,” she said. “Even a try, if people want to give it to us, we are ready. I play cricket because I know it’s my future. In the future maybe I’ll get into a national team. I’m working really for that. I train really hard. I lost everything, so cricket can be a life for me.

Samim aims to play another five to seven years before turning to coaching. With so much investment in cricket, she doesn’t want to see Afghanistan sidelined from the world stage. She encourages the men’s team to keep playing rather than face sanctions, and believes it brings joy to Afghans everywhere.

“I would like the men to continue playing. I don’t want the situation to have an effect on them. It is the only team that can bring happiness to my country. It is only cricket, no others sports [do that]. It’s good that they continue.”

And she hopes one day to be able to join them in real life in a game for Afghanistan.

“Going home now is impossible because the Taliban don’t accept me and I don’t accept them. But if something changes – for example, maybe they will allow girls to play cricket – [and] if there are matches, I should be there. It’s my country.”