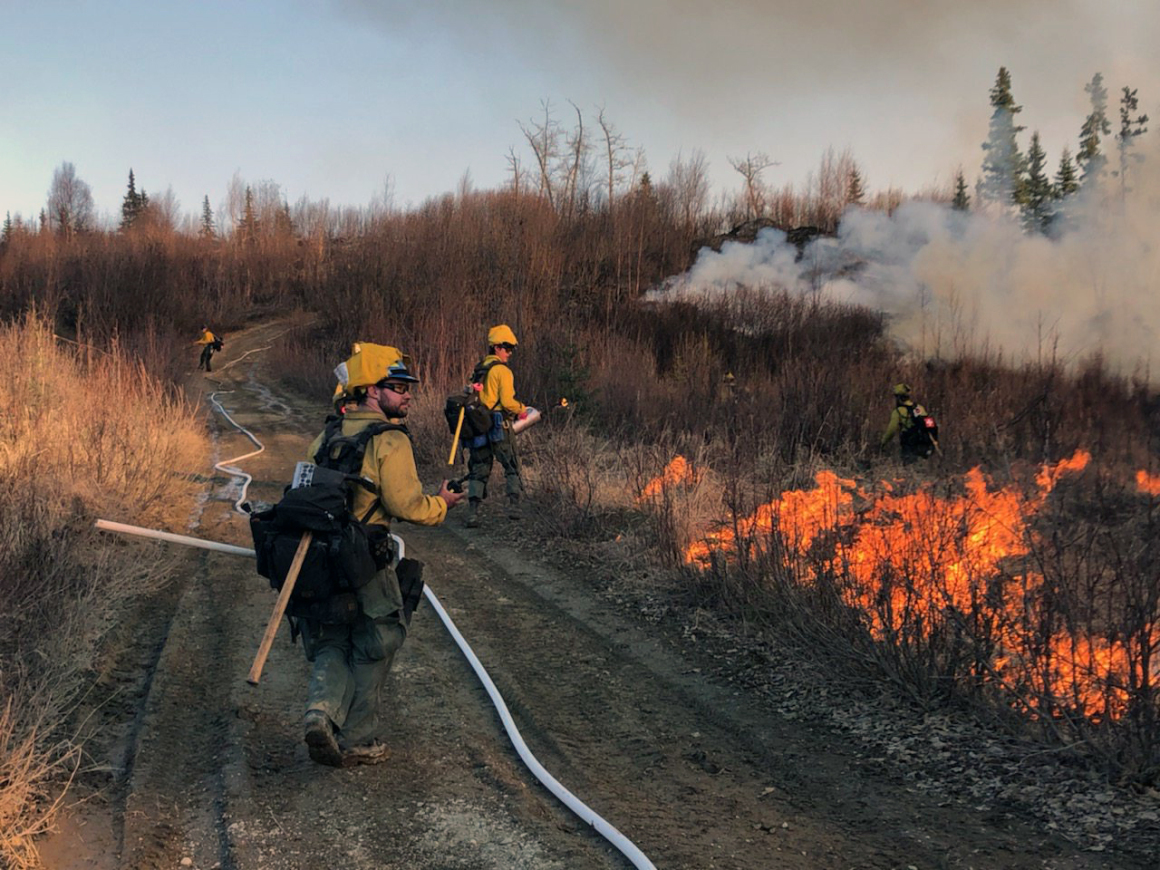 Alaskan wildland firefighters undergo annual training and — now with the help of a state grant — strategically cut and remove trees, many of which are standing, dry and dead, killed by mountain beetles. spruce.

This reduction in hazardous fuels comes as long-range forecasts point to a “normal” fire season ahead, with about a million acres expected to burn in total – somewhere between the sizes of Rhode Island and Delaware.

Norm McDonald, chief of fire and aviation for the state Forestry Division, said the preparatory work to cut firebreaks is helpful and likely to save money in the long run.

But McDonald said all it would take to go from an average fire season to a huge one is hot, dry weather and a lightning strike, or the careless burning of a brush or a campfire.

[Sign up for Alaska Public Media’s daily newsletter to get our top stories delivered to your inbox.]

The following transcript has been lightly edited for clarity.

Norm McDonald: If you look historically at our most devastating fires, they are in the urban interface and they were man-made. So these are all fires and, in theory, they should be preventable. So I think all you have to do is realize that any time you do any activity that involves burning or open flames in nature, exercise extreme caution, especially at this time of year, in May, because we have this dry grass and these windy conditions. It doesn’t take long for a fire to get out of control, beyond which a homeowner can put it out on their own. And these are our most expensive fires. Those who take the most resources, the most firefighters and planes. So we’re really asking people to be extra careful, whether it’s their typical Alaskan outdoor activities, you know, like camping and hunting, or when you’re doing your land clearing, consider other options. Instead of burning in May and June when it’s dry and windy, save that fire for the fall when we get our wetter conditions or that first snow in October. It’s something we really try to encourage people to do.

Casey’s Grove: I got it, yeah. Nobody wants something to get away from them like that and cause damage to their neighborhood or anyone else.

NM: No, and people are always surprised how quickly – they have a burning barrel or a small fire or a barbecue in the grass – how quickly a fire starts at something they can’t control with what they have there. And then the firefighters show up and the helicopter shows up, and it’s just that everyone we meet always says the same thing: “I had no idea how fast this fire could spread.” And so just something to know, for anyone doing this type of activity this summer.

CG: There are a lot of things you can’t really control, like the weather or where the lightning strikes, and things like that. And you can spread the word about how residents should behave to be fire safe. But I guess there are a few things you can do ahead of time to prepare. And one of those things is what you call reducing hazardous fuels, right? And I guess it’s a big push this year, it looks like.

NM: Yeah, and that’s nothing new for the division. We’ve been doing fuel brakes and reducing dangerous fuels, you know, since the mid-90s. And it really started with the first beetle outbreak that we had in 95, 96, that time. And so it’s something that we’ve used and had success with. What has changed this year is that we have, for the first time, last year, we received state dollars. Until last year, we relied entirely on federal subsidies for fuel reduction. And with this administration, public safety is a big part of their push. And we got a $10 million capital improvement project, just for fuel reduction. And so it gives us public funds to mobilize more federal funds, which are coming to us this year through the infrastructure bill. So we’re really in a good position to fund that work. And now, building capacity to meet the demands of this work is really where we are now. Yeah, it’s a really exciting time when it comes to opportunities to provide better service and public safety and grow those fuel cuts around some of our critical infrastructure and communities.

CG: Well, what are the fire crews doing right now, other than cutting fuels and cutting firebreaks? What are they doing to prepare for the next fire season?

NM: So our teams from the Forestry Division, they come back from mid-April, and they do what we call our 80 hours or two weeks of training. And that’s their fitness, that’s their fire readiness. They get their gear ready and get ready. They’re ready to go May 1, so our crews are staffed. They are ready to respond. We’ve pre-positioned them statewide, including Kenai and the Mat-Su Valley. The Fairbanks team is in Kenai as still snow on the ground means the fire season is a few weeks late. We have therefore pre-positioned them where they are available to do the most good and in a short period of time. But even though they are not assigned to fires, they do this fuel reduction work. So it’s really good pre-season work and that kind of cross-training for a lot of the similar work they do when there’s a wildfire. And that’s running chainsaws and, you know, cleaning out those firewalls is very similar to what it looks like on the line of fire, like it’s when they’re building a fuel cut before the fire . So they’re committed to this work and they’re ready and they’re pre-positioned and ready to go, if they’re needed anywhere in the state.