Biden’s bike accident isn’t about him. It’s all about the media – InsideSources 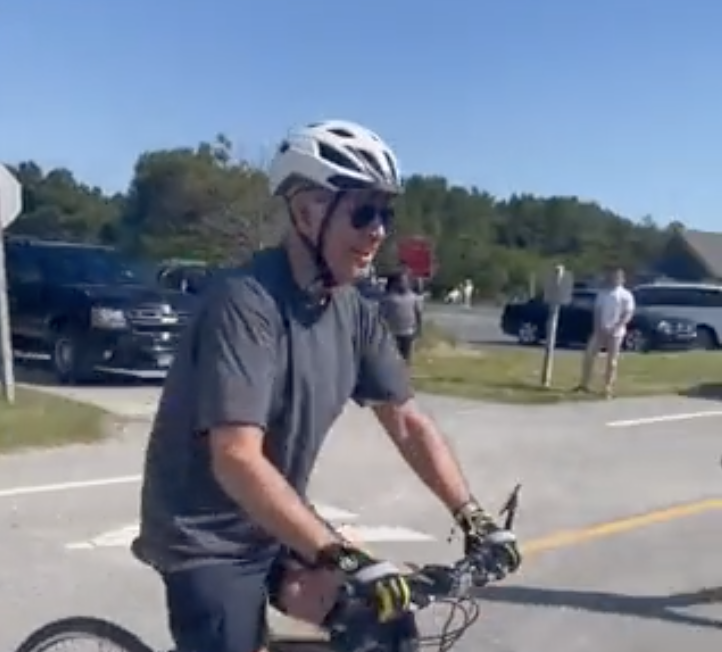 President Joe Biden had an accident with his Trek bike over the weekend when he tried to dismount to speak to a crowd. His foot caught part of the pedal clip and he went in front of the cameras and the entirety of Twitter. If not for the Tampa Bay Lightning’s 7-0 loss in the Stanley Cup Final, this would have been the worst crash of the day.

Biden should invite the Bolts back to the White House just for bailing him out.

Every president has awkward moments. It’s hard not to have them when all the news cameras – and now cellphone video recorders – are pointed in your direction. And like every fall down the stairs of Air Force One, they always seem to take a symbolic step in how their presidency is doing.

Joe Biden collapsing to the floor has led to instant memes about gas prices and inflation on social media, not to mention his advancing age. A good chunk of the country probably took a deep breath when it turned out he hadn’t broken his hip.

Kamala Harris has stopped measuring the curtains in the Oval Office.

The internet is of course going to have fun at the expense of Joe Biden. It’s a nice respite from five bucks worth of gas and skyrocketing grocery prices. He’ll be blaming “Putin’s sidewalk” any minute.

And then there’s the issue of the national media, which really matters when it comes to public perception of the president’s toughness. You see, the national media and some reporters (not all) were happy to push former President Donald Trump as a way to troll him for his questions about Hillary Clinton’s health in 2016. The problem for them, it’s when they excuse Biden’s follies.

In doing so, they widen the credibility gap that is as deep and wide as the Grand Canyon with the public.

“Trump’s Halting Walk Down Ramp Raises New Health Questions,” the New York Times headline screamed in June 2020 after delivering a speech at West Point. The story written by Maggie Haberman, Trump’s favorite media outlet, raised questions about Trump’s own health. CNN’s Chris Cillizza wrote, “Why the Donald Trump-West Point ramp story really matters,” citing Trump’s advanced age. “The President turned 74 on Sunday. He is the oldest person ever elected to a first term in the White House. Earlier this month, the White House released a memo on the results of the annual medical examination from Trump who only briefly described the overall picture of his health (height, weight, etc.).”

When it came to Joe Biden spilling out onto the sidewalk in front of an adoring crowd, however, Cillizza’s only response was “I’ve been there.” Joe Biden was at a complete stop when he fell. Sure, the culprit seems to be a stuck pedal, but maybe he had a moment of exhaustion or heat stress. On the verge of the 80s, who knows?

Biden’s own campaign has emphasized the president’s fitness, likening it to Trump’s awkward walking ramp. The problem with this route is exactly what we saw this weekend. Deputy Press Secretary Andrew Bates immediately took to Twitter to fend off the teasing and trolls, to no avail. It was hopeless, and this very online administration should have laughed at it. But because they themselves made Biden’s fitness an issue, it’s now fair game.

And because the media decided to go after Woodward and Bernstein for Donald Trump’s own health, they are now also fair game for their uneven and biased coverage, stupid as the case may be.

Not that voters see the president’s suitability for the job as a “dumb” question. A Harvard-Harris poll released in May found nearly two-thirds of those polled said, “Joe Biden is showing he is too old to be president. That includes 72% of independent voters and nearly a third (29%) of Democrats. In a new YouGov poll, more Biden voters in 2020 said they didn’t want him running again.

Forget the bicycle accident. At this point in his presidency, Biden could play in a Cirque du Soliel highwire act on the Vegas Strip and the Democrats would likely be down again in November.