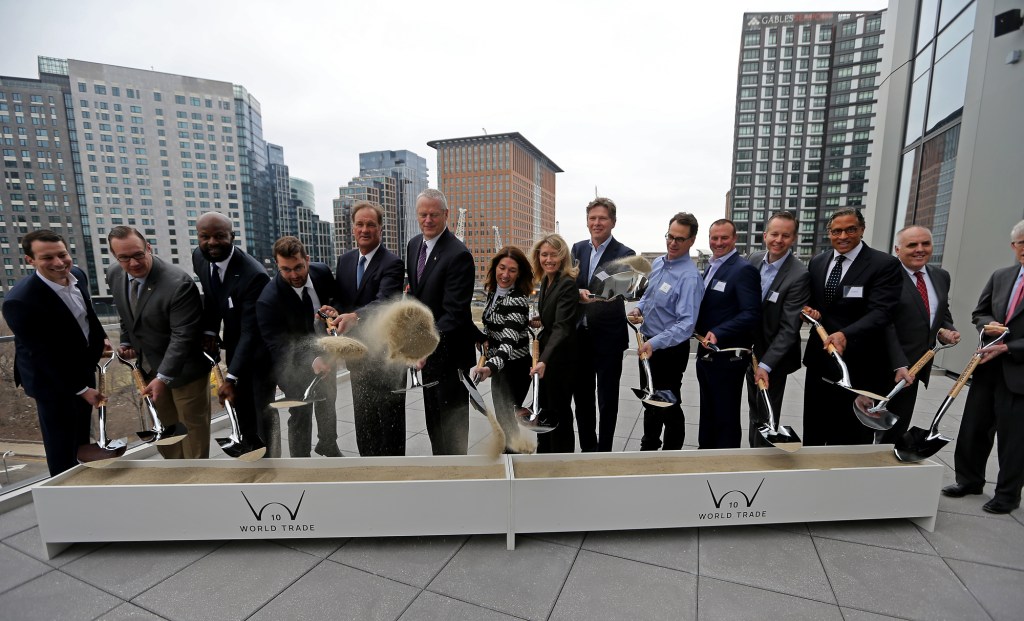 Who would have ever imagined shoveling hundreds of millions of dollars into a sandbox?

But that was the scene Thursday when Governor Charlie Baker and a group of the city’s top developers gathered behind a sandbox with shiny, silver-engraved ceremonial shovels to launch a massive $597 million project in the booming seaport.

“Has anyone ever made a revolution on the inside,” Baker asked the audience of local officials and business leaders gathered in a suite at the Omni Boston Hotel at the Seaport.

The event was billed as groundbreaking for 10 World Trade, “a premier life science and office development” originally slated to be built in 2020 but delayed due to COVID.

In truth, the inauguration had already taken place.

Behind Baker and former developer John Hynes III, outside the windows and under the 3rd floor balcony of the crowded conference room, machines and workers were busy in the field where there will eventually be a lab and a office building of more than 500,000 square feet.

Soon to be located where there was little more than a parking lot at 10 World Trade Center Ave., Watertown-based architectural firm Sasaki’s unique design will take shape with flared sides, an exterior glass and no internal column.

The design will allow public access to its ground floor, which will feature 40-foot vaulted ceilings and 24-hour dining, and will maximize the use of interior space, according to John Hynes IV, director of the 10 World Trade project.

The top floor of the structure will also include a state-of-the-art 15,000 square foot fitness center and a 300 meter running track.

The building will be surrounded by over 2 acres of sustainable, publicly visible landscaped green space, with a new pedestrian bridge planned.

Hynes III shared the site’s history with the public, noting that the town’s population had suffered due to various market changes. He noted that his grandfather, mayor in the 1950s, tried to stop this decline.

Hynes III said he hoped the project would bring more people to the city, continuing his grandfather’s work.

“There’s real value in believing that you’re building on the work of those who came before you,” Baker told Hynes III and Hynes IV.

After the public speaking, the assembled officials took to the open-air balcony to dunk their ceremonial shovels in a sandbox.

Behind them, as green rights construction workers moved around the building site, a pair of cranes hoisted a “10 World Trade” flag in the wind.

Officials tossed sand in the air for pictures and the wind picked it up, blowing it back into the faces of the governor and developers.