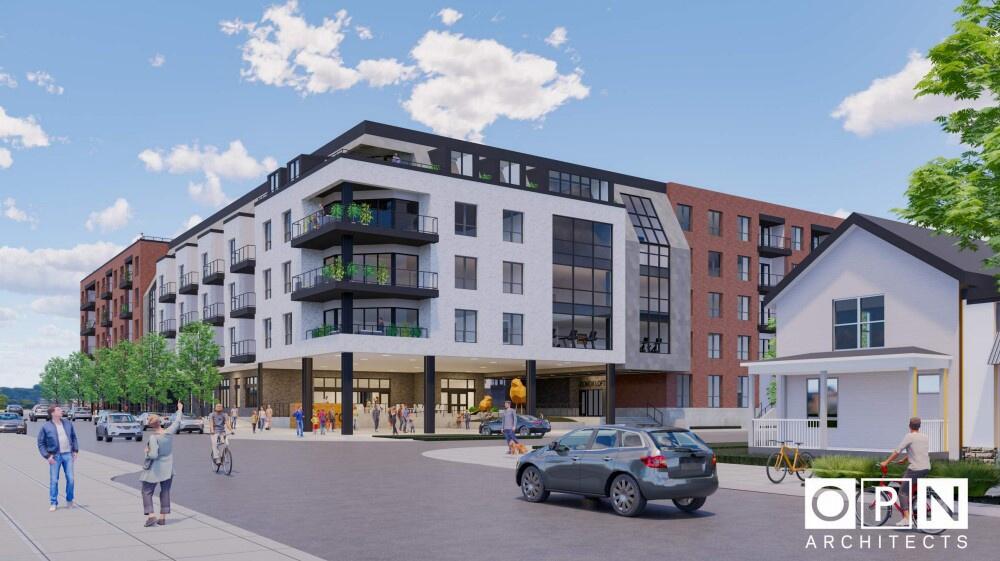 CEDAR RAPIDS — A local developer is looking to transform a long-vacant block on Main Street connecting downtown and the New Bohemia neighborhood with a $36 million mixed-use building that will add 186 rental units, retail space to the detail, a patio on the roof and parking.

Dave Drown, president of GLD Commercial, gives the empty lot of the former Loftus Lumber site, 900 Third St. SE, another chance at redevelopment after previous plans failed amid a legal dispute between the O family ‘Connell, owner of the land, and previously proposed developer Richard Sova of Illinois-based Landover Corp.

“It’s been worked on for so long by so many people and it’s been an eyesore to the community,” City Manager Jeff Pomeranz said of the Loftus project. “We have worked very hard to get here, and we are very pleased that GLD, through Dave Drown, has taken on this great task, and it will be a great convenience for Cedar Rapids and New Bohemia.”

The five-story building would feature 186 market-priced rental units – a mix of studios, one-, one-plus, two- and three-bedroom units – as well as a rooftop patio and entertainment area. amenity, 11,000 square feet of prime commercial and commercial floor space and surface and covered parking.

Construction is expected to begin in April 2023 and end in October 2024.

City Council will consider the city’s incentives for the project on Tuesday — a 100% refund of additional taxes generated by the development, a net present value of $6.4 million.

“Projects like this require layers of financing to get them done, especially in the current economic conditions with escalating prices,” as well as rising interest rates, delays and supply chain issues. supply, said director of economic development Caleb Mason. “All of these things add costs to the project, especially one that takes so long to build. All of these costs are compounded.

Given the building’s large size — similar to nearby Bottleworks and Water Tower Place Condominiums — Drown said there’s a certain sensitivity to a sense of scale, so it’s designed to look like multiple buildings.

He said it matched the aesthetic of the neighborhood, using identical red bricks, then switching to different materials and designs.

Early on, Drown said the developers met with people from the neighborhood and city government for feedback, tried to implement a lot of that into the plan, and used OPN architecture services to give it life.

“We are excited for the opportunity to move forward and look forward to increasing the downtown housing stock,” Drown said.

The O’Connells still own the land. Drown said the plan is to close the land this fall, subject to obtaining city approvals for the project.

The O’Connells and Sova agreed to dismiss a lawsuit over the land before the case went to trial.

Through Sova entities, Landover Corp. and Cedar Venture LLC, he filed a lawsuit last June against the O’Connell family, alleging the family breached the contract by seeking to sell the property to an unnamed third party.

According to court documents, Sova had obtained all the necessary financing in November 2019, when an investor abruptly pulled out of the project in March 2020 about 60 days before construction began, forcing it to seek new investors.

By the time he secured two investors to move the project forward, according to court records, the O’Connell family had entered into a real estate purchase agreement with a third party.

Over $100 million investment in housing

There are several housing projects on Tuesday’s city council agenda, collectively topping a $100 million investment, which Pomeranz says signals a city with plenty of momentum.

“In these economic times, this shows the interest and support Cedar Rapids has from the development community, and we believe these projects are going to be very successful,” Pomeranz said.

Another project is KCG Companies’ proposed $41.2 million redevelopment of the Midwest Athletic Club building at 1220 Jacolyn Drive SW, which was damaged in the 2020 derecho, into affordable housing.

The developer plans 36 one-bedroom units, 95 two-bedroom units and 50 three-bedroom units, for a total of 180. All units would be reserved for households with incomes equal to or less than 60% of the region’s median income. It would also include amenities such as a swimming pool, dog park and fitness center.

Under the city’s local economic development program, Cedar Rapids would grant a 10-year exemption of 100% of the value generated from the improvements – an estimated value of $3.2 million over the 10-year period, or a net present value of $2.1 million. . The developer is also seeking state assistance through the Iowa Finance Authority’s 4% low-income housing tax credits.

Additionally, the developers behind the $81.5 million mixed-use site First and First West are seeking labor housing tax credits for 63 units included in a mixed-use building along from First Avenue W. The overall building costs about $15 million to $16 million, Mason said, including $9.8 million for housing. There are also offices and commercial spaces in the building.

The city’s incentives for this building would yield an 85% tax refund over 20 years, or about $2.4 million over that time.