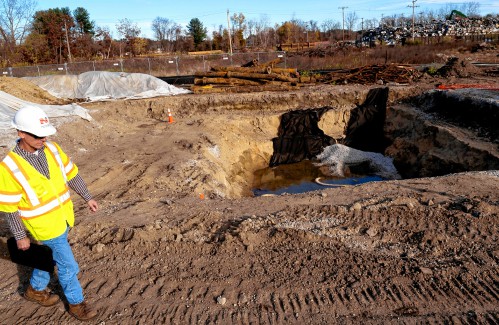 The construction of an affordable residential development above a former rail yard in South Concord has been applauded for helping to ease the city’s housing shortage.

“Without reallocating industrial sites like these, they become an eyesore and better to reallocate,” said Jeremy Vieira, director of development for real estate owner Dakota Partners. “Housing is incredibly needed in Concord and I’m so excited to reallocate industrialized sites in hopes of reducing housing demand.”

However, the project which is currently under construction has left some city residents wondering about the environmental safety of the Langdon Avenue site.

When the land was first developed as a railroad yard in the late 1800s, the crescent-shaped land was filled with freight trains that meandered between industrial buildings, some the full length of the site. -same. When the company closed in the 1950s, nearly 70 years ago, the buildings were leveled and the debris was buried on site.

The work led longtime Concord resident and environmentalist Rob Blakeney to wonder if the former rail yard site would be safe for future residents.

“Why is this site allowed to be developed, in any way, when it still contains known hazardous waste?” he said.

When the site was vacated in the 1950s, it was referred to as an urban dump because of the debris left behind, said Sean Donnelly, construction project manager for the developer, Dakota Partners.

During excavation over the past four months, construction workers have found debris in addition to asbestos-covered piping and a leaking oil tank, which is normal at a site like this. here, Donnelly said. All materials have been inspected by professional geologist Tim Andrews of the engineering firm Nobis Group in Concord. He regularly monitors the site and the excavation work. All hazardous materials have been or will be properly disposed of.

“We are mitigating these risks and remediating and improving the environment by covering areas with clean materials,” he said during a site visit last week.

Although the area has not undergone groundwater or soil testing since 2014, when it was proposed and turned down as a steam plant, Michael McCluskey, professional engineer and brownfields program coordinator for the New Hampshire Department of Environmental Services, said that because the site has remained vacant since then, the state has not seen the need for further testing.

“The original decisions and site investigations were done there and we found nothing too concerning from a hazardous waste perspective,” McCluskey said. “We are not aware of any ongoing issues based on the data we have obtained.”

Still, the site is considered brownfield, like most industrial-turned-residential areas seen throughout New England, especially Manchester and Boston, Andrews said.

“It’s a brownfield in the sense that when it was attempted to develop it got brownfield coverage and liability and it would meet the definition of a brownfield, but it’s not not run like a brownfield,” McCluskey said. “It’s also not run as a hazardous waste site.”

Continuing, McCluskey explained that, by definition, a brownfield is the development and reuse of a property that could be compromised by a perceived hazardous substance, pollutant or contaminant.

The Environmental Protection Agency estimates that the United States has about 450,000 brownfields, many of which have been redeveloped into residential housing, apartment complexes, commercial buildings and schools by developers like Dakota Partners.

Federal, state, municipal and site engineers have all deemed the site safe and have no concerns for future residential use.

The Rail Yard will be one of the city’s largest residential developments in years, with 199 rental units spread across three three-story buildings. The complex will include affordable apartments, a community pavilion, a fitness center and two commercial spaces.

A freight train track runs parallel to the property and a scrap yard adjoins.

“There will be a central plaza between the buildings which will be used as a type of quad to block off part of the steel landfill behind the residential area and evergreen and vegetation screens will be planted to further block the view,” Vieira said.

When Dakota Partners first purchased the property, the ground was uneven with hip-high brush covering the site. Since then, the land has been completely cleared and leveled and four foundations have been excavated and poured.

To honor the railroad’s history at the site, the rail yard development will pay homage to its industrial past, Vieira said.

Updated design plans show multi-colored, three-story buildings with pitched roofs, an inviting courtyard with sidewalks and walkways, and a community building set back on the property.

A road through the complex, which will begin and end at Langdon Road, will circle the buildings and provide parking for residents.

Other projects include a three-story wood-frame building containing 17 one-bedroom units and 24 two-bedroom units in Bedford called Kensington Woods which was completed in 2017. In Milford, Dakota Partners rehabilitated a historic mill from the 1870s into a modern 70,000 square foot mixed-use complex. -building for use with 35 one-bedroom apartments and 15 two-bedroom apartments. Completed in 2014, the project won a Preservation Achievement Award from the New Hampshire Preservation Alliance.

Another proposed project in Goffstown called Woodland Village will be a townhouse development consisting of 76 one- and two-bedroom townhouse units in 13 buildings located on a vacant 37-acre site.

When the Rail Yard project was first presented to the Concord Planning Board in the summer of 2021, Dakota Partners estimated that construction could take between 12 and 18 months. City officials expect the first occupancy certificates to be issued by fall 2023.