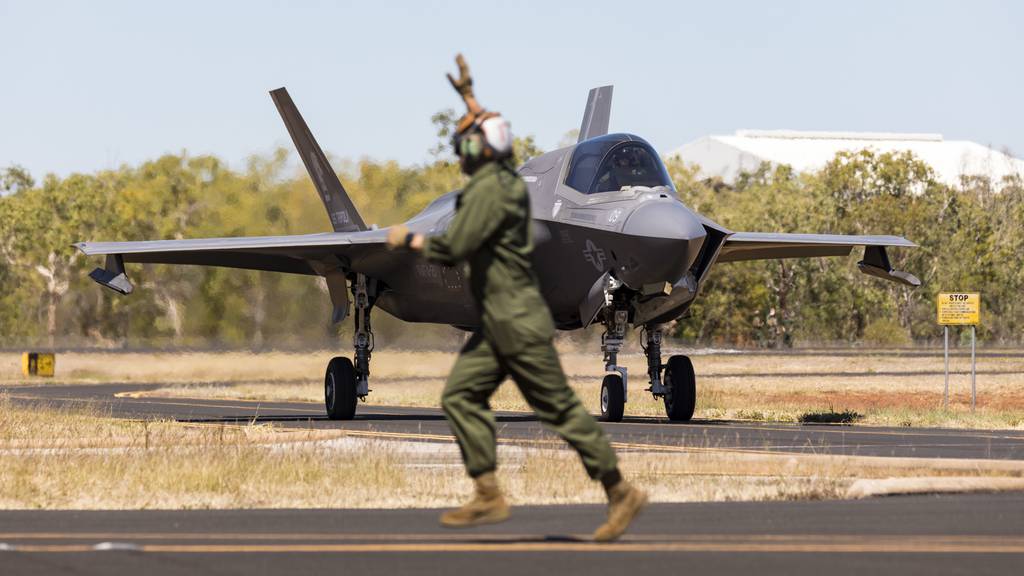 DARWIN, Australia – The F-35 fighter jet makes its multinational exercise debut at Pitch Black in Australia, with US Marine Corps “B” variants taking part in exercises there ahead of the main event .

According to Lt. Col. Richard Behrmann, operations officer at Marine Aircraft Group 12 based in Iwakuni, Japan.

The F-35Bs have been deployed to RAAF Base Tindal, 600 miles from Curtin, since mid-August for ‘robust’ unit-level training ahead of Pitch Black, a military exercise involving more than 2,500 personnel and planes from 10 nations.

Behrmann told Defense News on Friday that EABO training in Australia was the culmination of several MAG-12 events intended to refine the concept. One such event included the use of Tindal as a hub and Curtin as a spoke to reflect EABO’s hub and spoke model, with the officer calling it the most “robust and thorough” exercise of the concept of the unit.

EABO envisions Marines being able to deploy mobile and easily sustainable expeditionary forces to austere, temporary locations in or near contested areas to conduct missions such as sea denial or sea control.

RAAF Curtin Base, which locals refer to as a front-line “bare base,” has a 10,000-foot runway, aircraft shelters and other infrastructure, which are normally manned and maintained by a small custodial staff, unless activated for use during drills or a crisis.

The 12 F-35Bs from Marine Fighter Attack Squadrons 121 and 242 are also down for training with other subordinate units from MAG-12 – Marine Wing Support Squadron 171 and Marine Aviation Logistics Squadron 12.

Behrmann also said the F-35s deployed to Australia with the Autonomous Logistics Information System, which is used for predictive maintenance of the aircraft. He noted that the Marines used a very small aperture terminal – essentially a ground station with a satellite dish – to transmit data to ALIS.

Behrmann noted that of the F-35Bs and other support platforms, only one aircraft abandoned an assigned sortie during the previous three weeks of the deployment.

During Pitch Black, which runs from August 19 to September 19. 8, American F-35Bs and Australian F-35As flew air-to-air and air-to-ground missions during the day and night in large-scale employment operations with a variety of aircraft from other partner nations, including F-15, F-16 and Su-30 fighters.

Behrmann said these exercises enhance interoperability and integration capabilities with allied and partner nations in the Indo-Pacific region and beyond, adding that ample airspace has been set aside for the exercises.

This year’s Pitch Black also provided an opportunity for partner nations to observe the F-35B up close and in action, with the Marine Corps hosting delegations from partner nations, including one from the Next Generation Fighter Project Office. from Singapore.

Singapore has chosen the F-35B as its next-generation fighter, and the US State Department has already cleared the first four aircraft for sale with an option to purchase eight more. First deliveries are expected to begin in 2026.