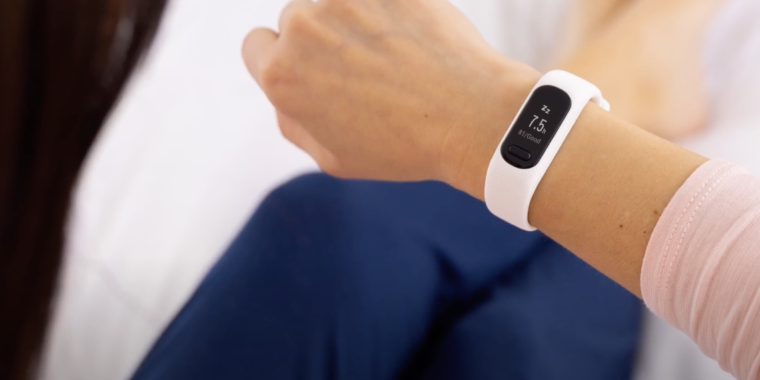 Garmin has just released its latest fitness tracker, the Vivosmart 5, a wearable accessory designed to cover the basics of sleep and activity tracking and provide phone notifications. It replaces the now 4-year-old vívosmart 4. But in four years, the new tracker hasn’t changed much since the last release, while rivals like Fitbit’s Charge 5 have made significant leaps.

When Garmin launched the Vívosmart 4 in 2018, it featured benefits like a then-rare blood oxygen sensor and Garmin’s typical suite of in-depth health metrics that topped most competitors. Now, Fitbit’s equally priced Charge 5 fitness tracker also has blood oxygen sensors, as well as electrodermal sensors (for stress measurement), GPS, and the ability to take ECG readings. , everything the new Vívosmart 5 lacks.

I spent a weekend sleeping, working out, and tracking my body’s vitals with the Vívosmart 5 before its official launch to take a quick look at the device and get a feel for the relevance of Garmin’s in-depth data and proprietary measurements. to buy. As this is a pre-release model, there were a few known bugs, but nothing would stop us from getting a clear picture of its capabilities.

The Vívosmart 5 has the same basic appearance as the 4. It’s a slim silicone fitness band with a small black and white OLED display. The strap buckles like a traditional watch strap, just like its predecessor, except now the straps are interchangeable by simply popping the tracker out. It looks transparent and you have to take it off your wrist to take the tracker out.

The screen grew by 66%, but that didn’t make it bulkier. Even with a wider screen, it’s still a narrow device. Garmin has also integrated a physical home/back button below the display, where a haptic used to sit. The plastic button requires deliberate pressing to depress, so I never had any errant button presses during my time with the device.

On-screen animations are smooth and touch response is good. It’s a small screen, though, measuring around an inch long and half an inch wide. So while menu widgets and text scale well, longer notifications, like emails or text messages, require some scrolling. The screen can hold at most eight short words at a time.

The Vívosmart 5 can track heart rate, blood oxygen levels, stress, and respiratory rates throughout the day and night. There are 14 activity tracking modes, including HIIT, yoga, strength training, and breathing, among others. Garmin also allows menstrual cycle tracking in the companion app.

The activity and sleep tracking data was close to the readings taken from my Apple Watch Series 7 and Google Nest hub sleep detection. The Vívosmart’s heart rate data and associated calorie burn were on track with the Apple Watch’s activity readings, but the deeper analytics one would typically choose a Garmin device for aren’t there.

Since it’s a more basic tracker, calories, heart rate, and heart rate zones are the only data you’ll collect from Activities. There’s no built-in GPS, so you’ll need to take your phone with you if you want location data recorded during a run or cycle. And you won’t find analyzes of your anaerobic and aerobic gains like you would with more robust Garmin wearables, like the Forerunner range, for example.

The Vívosmart has Garmin’s Body Battery metric, which helps you gauge your daily recovery and exertion, but it’s not as robust or prescriptive as Fitbit’s Daily Readiness feature. Instead of just presenting a score of zero to 100% like Garmin, Fitbit also recommends specific workouts for your days, depending on whether it thinks you should focus on intense, moderate or recovery-focused activity.

Fitbit charges $10 a month for this, plus other data and content, in its Fitbit Premium subscription plan, however – a subscription model that Garmin said it won’t replicate, as have also said a growing number of clothing manufacturers.