How to fall asleep in two minutes: A personal trainer shares the military technique that can help you fall asleep 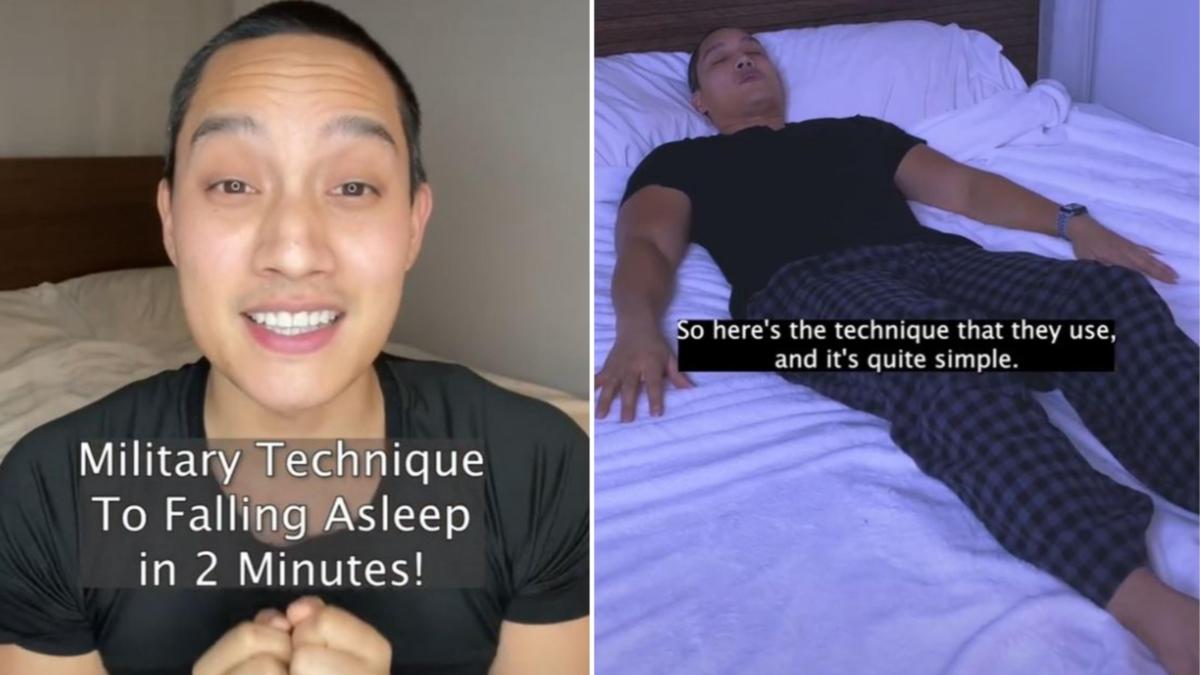 A personal trainer has revealed the military technique that claims to help you fall asleep in as little as two minutes.

Justin Agustin shared a TikTok Video showing the “mind-blowing” method that is said to have been developed in the military to allow soldiers to fall asleep anytime, anywhere.

WATCH THE VIDEO ABOVE: How to fall asleep in two minutes

“The ooze for a soldier is crucial…Even on the battlefield, when the environment is extremely uncomfortable and there is a lot of noise,” he said.

“Now, according to my research, this was developed primarily for fighter pilots who need 100% reflexes and focus, which we all know declines with lack of sleep.”

He said the technique the soldiers used to fall asleep was “pretty simple”. Start by relaxing every part of your body, from head to toe.

“First of all, you have to calm your body down and systematically relax and shut down every part of your body from head to toe,” Justin says.

“Start by relaxing the muscles in your forehead. Relax your eyes, cheeks, jaw and focus on your breathing.

“Now get down to your neck and shoulders. Make sure your shoulders are not tense. Drop them as low as possible and keep your arms loose at the side, including your hands and fingers.

While you’re in a relaxed position, Justin suggested imagining a “warm feeling” going from your head to your fingertips.

“Now take a deep breath and slowly exhale, relaxing your chest, stomach, down to your thighs, knees, legs, and feet,” he said.

“Again, imagine that warm feeling going from your core down to your toes.”

Justin said it’s important to clear your mind of all stress.

If at any time you find yourself thinking about something else or being distracted, he said you should repeat the words “don’t think” for 10 seconds.

Justin concluded, “So that’s the technique, you’re supposed to practice every night for six weeks.”

His video has since been viewed more than 4.5 million times, with many insisting that the technique “definitely works”.

“My doctor taught me this technique with slight variations when I had insomnia due to PTSD. Believe me, it 100% works once you figure it out,” one woman wrote.

And another added: “I didn’t know it was a military thing. A university professor told me about it. I fall asleep before I reach my feet.

While many said they would try the sleep method.

“I have very bad insomnia and nothing works. I sleep a little with a lot of medication, but I never wake up rested. I’m trying this,” one woman wrote.