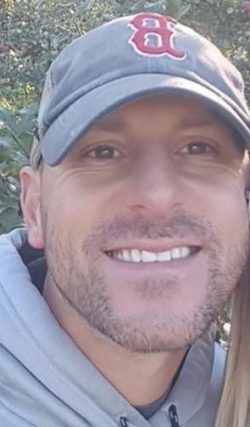 TEMPLE – Jody R. Meader, 46, died suddenly at his home in Temple and was found by his significant other, Carrie Hatch, with whom he was living, upon returning from work on Monday afternoon, April 4, 2022.

He was born in New Haven, Connecticut, the son of Kenneth Leon and Marlene Theresa (Herman) Meader. He received his education from local schools and graduated from Mt. Blue High School where he excelled in sports, especially football and lacrosse. He was an avid baseball player and enjoyed coaching his sons, the Little League baseball team, the Hawks and the All-Star baseball team.

Jody was committed to fitness and wellness and could often be found in her spare time working out at the UMF Fitness Center. He was a loyal member of the Red Sox nation and had a passion for collecting, trading and selling vintage sports cards.

He was a true outdoorsman, preferring to hike, kayak, camp, hunt, fish, snowshoe and spend time exploring with his family and friends.

Jody is loved and will be missed by his sons: Jayden and Karter Meader, of Wilton; his father, Kenneth and his fiancée, Judith McMillan; her significant other, Carrie Hatch of Temple and her children Jazmyn J. Begin of Wilton, Nathan J. Farmer of Temple and Lola the dog.

He is also survived by his sister, Lisa Meader of New Sharon; two half-brothers: Richard Castaldi of North Haven, Connecticut, and Joseph Burns of Farmington; his nephews: Devin M. Meader and Levi N. Meader, both of Farmington.

He was predeceased by his mother, Marlene Meader.

Family and friends are invited to call Wiles Remembrance Center, 137 Farmington Falls Road, Farmington, Saturday evening, April 9 from 6-8 p.m. Funeral services will be Monday morning April 11 at 11 a.m. from Vienna Methodist Church with Rev. Laura Church officiating. Following the services, a reception, hosted by the Women’s Fellowship and Jody’s family, will be held in the church sacristy. Everyone is welcome. Private services at the family cemetery will be held later in the spring at the Franklin Cemetery in Vienna.

Memorial gifts may be given in Jody’s name to Jayden and Karter Meader’s education account at Franklin Savings Bank PO Box 825 Farmington, ME 04938. Memories may be shared in her memory book on her memorial wall at www. wilesrc.com.