Las Vegas man with Down syndrome participates in bodybuilding competition 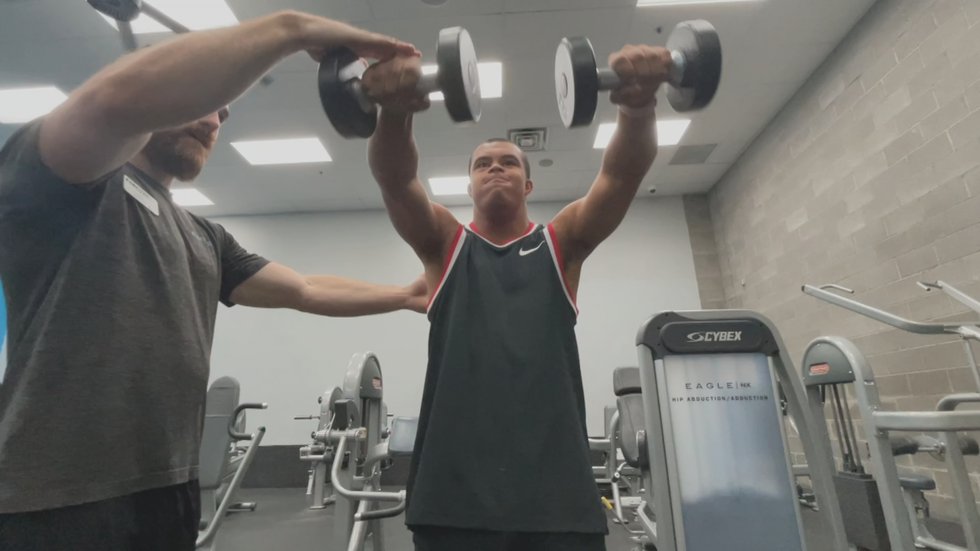 LAS VEGAS, Nev. (FOX5) — When you meet Joe Burwell, the first thing you notice is his beaming smile. The medals he wears proudly around his neck shine almost as much.

Last month, the 19-year-old with Down syndrome took part in his first bodybuilding competition and won. FOX5 visited Joe at his happy place: the catalyst for his bodybuilding dreams, also known as EOS Fitness. This is where he met Jake Mader a year and a half ago. Mader is the Henderson Gym’s head trainer and Joe’s strength trainer.

Mader is legally blind and knows all about the obstacles to overcome.

“Six months ago Joe told me his dream was to get on stage and be a builder,” Mader said.

So the dynamic duo got to work.

“I’m just doing it for my dreams,” Joe said.

“Joe knows everything that goes into his body,” Mader said. “Just keeping track of all of this in addition to preparing for it is a journey in itself.”

Joe’s parents, Kathy and Jerry Burwell, support and encourage Joe every step of the way.

“He sets his schedule for himself,” Jerry said. “He prepares his own lunches when he comes home from school. He learns to be very independent.

Mom and dad couldn’t be prouder to see their child defy all the odds. Not only was Joe born with Down syndrome. He was also born with a hole in the middle of his heart.

“When he got it fixed, they told us we’d probably go home without him,” Kathy said. “Thanks to much prayer, he miraculously pulled through.”

Despite Joe’s challenges, his parents made it a point to treat him the same as his siblings.

“We expect everything from him like we would any of our other kids,” Jerry said.

What started as a mission to lose weight in quarantine turned into a life-changing experience. Since starting his bodybuilding journey, Joe has gained a lot of muscle. He also gained some notoriety.

“In fact, people came up to us in the gym and asked if they could take their picture with Joe,” Jerry said.

“When you walk into the gym and they’re working out, you can hear them from the front desk,” Domstrand said. “You always know when Joe is training with Jake because the energy in the club is just contagious.”

Fighting back tears, Mader said, “I probably learned more from him than he learned from me.” “It is a pleasure to work with him every day. It really is.”

Joe will be spending the summer training for his next bodybuilding competition which will be held in the fall at the Rio in Las Vegas.