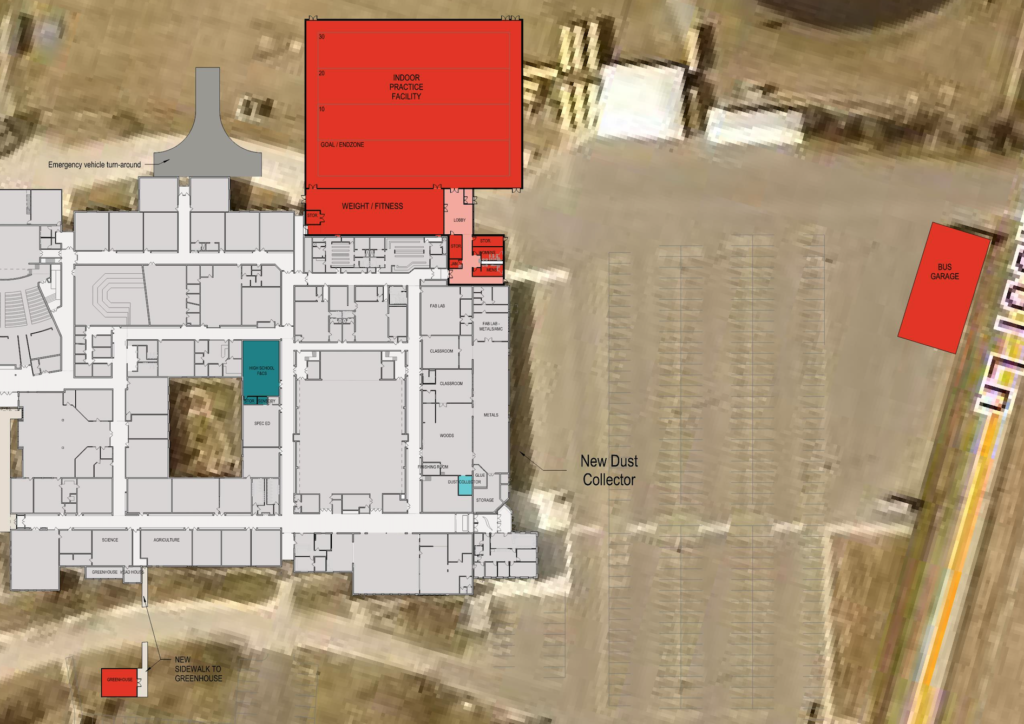 The multipurpose training center the Southern Door School District wants to build is the most expensive of the projects contained in a $14.9 million capital improvement plan the district wants voters to approve in November.

Superintendent Chris Peterson confirmed this last week when he released more detailed descriptions of the buildings that would be erected if voters approved the measure. The district administration and council also have a request for a $975,000 per year referendum on the ballot that would renew funding for operations for the next three years.

Capital projects include construction of the new multi-purpose training center and bus garage, and improvements to elementary and middle school art rooms; the fields of technical, family and consumer education; and agriculture and education areas, including a new greenhouse. The district office would move from a house across from the school into the current fitness center space, and a contractor would demolish the ranch-style house to create more parking space.

Peterson said the indoor multi-purpose training facility — which the district would make available to the community — would likely cost the most on the list of projects, with exact costs depending on tenders and materials. The facility would be used by sports teams, but also for orchestra rehearsals, physical education classes and assemblies.

Beneath what are supposed to be high ceilings and a peaked steel roof, the neighborhood could provide plenty of practice space and room for a wider variety of activities on bad weather days.

“We’re going into spring sports, and our baseball, softball and track and field teams can’t be outdoors because we still have piles of snow on our fields,” Peterson said. “It would allow our children to have access to an indoor facility.”

Students currently use the Eagle Gym, but Peterson said it’s not conducive to throwing softballs or baseballs.

“We have to install nets and screens,” he said. “We have bleachers that are damaged.”

The facility would contain a 30 meter long indoor synthetic turf pitch, plus a 10 meter end zone and room around the perimeter of the pitch.

“Fifty or 60 yards [for the field] would be better, but we want to be realistic about what we’re asking for,” Peterson said.

The multipurpose facility would also include the weight room, which would be moved from its current location to the front and center of the school.

Peterson said the multipurpose space would be larger than the gymnasium because district officials want a peaked roof rather than a flat roof, which would require repairs and leaks sooner. Additionally, Peterson said, “In the middle you could get more arc on a pass.”

The superintendent said the exterior wouldn’t need any extravagance.

“At the base, the first five or six feet would probably be block, then it would be basically a pole building beyond and above,” he said. “We want to make sure we’re doing something that’s going to give us longevity. We’re not going to cut corners and then have to pay for more maintenance later.

Peterson said the other two construction projects included in the referendum would not be as large as the mixed-use building.

An existing greenhouse would be replaced with a greenhouse approximately 24 feet by 90 feet detached from the school to provide longer periods of light. The current greenhouse lacks several hours of natural light due to its location against the school.

The larger greenhouse would expand on the hydroponics stations the district already has, and it would allow more room for hands-on, real-life lessons in horticulture.

“We have a large agricultural community and we want to be able to add more agricultural studies to our course offerings,” Peterson said. “Having a functioning greenhouse is going to be much, much better.”

The new bus garage would be used for storage and interior repairs.

“It would be big enough to have some of our lawn equipment, and it would have to be long enough to pull a bus inside to work on it,” Peterson said.

The preliminary site plan for all major upgrades has been completed and will be mailed to all district addresses.

“It’s in a referendum information package that’s coming out soon,” Peterson said. The information also went up on September 9 on the district website at sdsd.k12.wi.us.