Overdose deaths will be commemorated at Edinburgh event 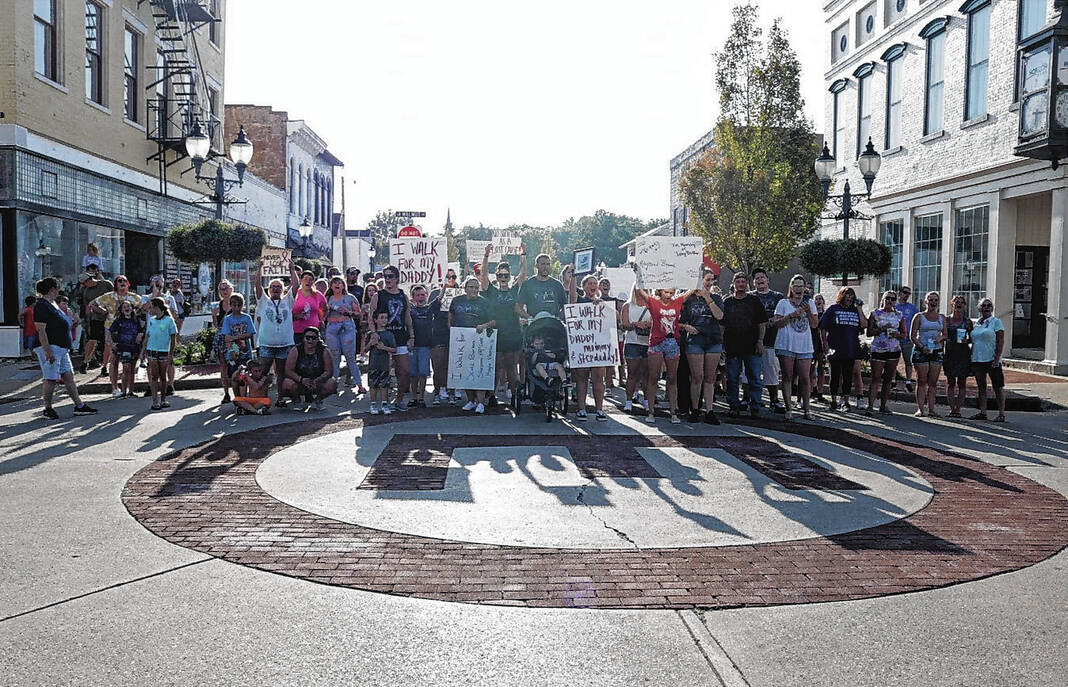 With posters, t-shirts and other memorabilia, hundreds of people paid tribute to those they had lost to drug overdoses.

They paraded for mothers and fathers, sons and daughters, brothers and sisters and friends. More than 250 people had come to Edinburgh in August 2021 to remember the people in their lives who have been killed by substance use disorders. The goal of the Turn the Town Purple march was to provide a sense of comfort to a community shaken by an overdose.

Organizers are bringing the event back this year, as Edinburgh and surrounding communities continue to struggle with substance use disorders.

“The disease of drug addiction has affected Edinburgh tremendously. I never thought this event would become so big,” said Misty Hogan, event organizer and Director of Admissions and Business Development at Cardinal Recovery.

The Turn the Town Purple Overdose Awareness Walk will once again bring people together to remember those lost to drugs and alcohol. But in addition to commemorating these people, the event will also provide resources and awareness.

“Last year’s walk was about closure, (whereas) this year’s walk is about giving hope and giving resources to the community and those who are struggling,” Hogan said. “We will still remember those we have lost because we never want to forget them. But we didn’t want to do the exact same thing this year and wanted to focus on bringing the community together.

Turn the Town Purple was created last year to remember those who died of drug overdoses and to recognize those who are recovering from substance use disorder on their own. Hogan, who recently completed four years of recovery, had lost someone close to her, Sheyenne McCall, to an overdose.

Not only was Hogan a friend of hers, but she sponsored McCall in his own recovery.

“I started getting these calls from people in Edinburgh saying we had to do something,” she said.

The goal was to raise awareness while helping family and friends mourn those lost to substance use disorder.

The walk was organized by Recover Out Loud, an active recovery community formed by Edinburgh native John Cunningham that uses fitness, sports, social events and other activities as part of the recovery process. They are open about the hardships that got them to this point and share their own experiences in the community.

“It’s important to me to bring something positive back to my hometown to show people that it’s possible to change and recover,” Cunningham said. “Many people in Edinburgh have seen me at my worst and remember me in active addiction. Now I can share my recovery with them in a positive way, to raise awareness and bring hope.

Since its initial formation in Greensburg, the group has expanded to include gatherings in places such as Franklin, Bloomington, Seymour, Nashville and Edinburgh. A clubhouse and fitness center are established in Columbus.

Instead of having a strict process that they follow, the band instead believes in the importance of bonding, Hogan said.

“One of our mottos is that the opposite of addiction is connection,” Hogan said. “So we are like a family. We go camping, we go on weekend retreats, we throw New Years and Super Bowl parties. When you feel part of a family like this, you want to be included.

Many organizers living in or with links to Edinburgh were well aware of the scourge of drug addiction which plagued the city and county as a whole.

The past two years have seen an abundance of opioid overdose deaths throughout Johnson County. In 2019, the county reported 19 deaths from any opioid drug. This number rose to 57 people in 2020 and there were 31 deaths in 2021.

Medical staff are also canceling more overdoses with the drug naloxone. In 2020, the county reported 382 incidents involving the administration of naloxone. EMS gave 470 doses in 2021.

In the first seven months of 2022, paramedics are reporting 200 incidents involving naloxone.

Defenders have worked with City of Edinburgh officials to resolve the issue. A Naloxbox – a mounted case containing life-saving naloxone doses and resources on substance use disorders – was installed in mid-April. Recover Out Loud has launched a weekly rally at Edinburgh’s Parks and Leisure building.

The success of Turn the Town Purple last year proved how many people share his desire to fix the problem, Hogan said.

“The community response has been overwhelming. We’ve been hosting events for four years now, and Edinburgh has been the busiest event to date,” said Cunningham. “We anticipate a greater turnout this year and are delighted with the partnerships and sponsorships of local businesses, the City of Edinburgh, recovery resources and community members who have donated their time, money or food to make this event a community event. ”

When planning this year’s event, the goal was to make it bigger and better, thanks in part to a Drug Free Johnson County grant.

The focus on substance use disorders will run for several days at the end of August. On August 25, the Edinburgh Pixy Theater will offer a free screening of ‘The Addict’s Wake’, a documentary about the ripple effects of heroin, methamphetamine and opioid addiction in Brown County. The film won the Indiana Spotlight Award at the Heartland Film Festival and the Independent Spirit Award at the Sedona International Film Festival.

Recover Out Loud will take questions after the documentary.

Then the main event takes place two days later at Irwin Park. It all starts with a kickball match between Recover Out Loud and Edinburgh Police and Fire.

Area addiction treatment centers, including the Tara Treatment Center and Cardinal Recovery, will be available to distribute information and answer questions.

“A lot of people just don’t know. I get calls all the time – they know that person or that struggling person, but they don’t know where to go,” Hogan said.

Organizers also hope to reduce some of the misconceptions and stigma surrounding addiction and recovery.

“A big misconception is that people think they can go to rehab or do a 30-day program and they’re cured. But that’s just not how it works,” Hogan said. .

During Turn the Town Purple, a banner will display the names of local residents who have died from drug overdoses. The t-shirts will include the names of the deceased.

But the event also aims to celebrate those in recovery. Live music from Twisted Tiara, a local group of musicians aged 10-13, and Jim Jam and the Scrim Scrams will be featured throughout the evening. Free food, a bouncy house and family activities are planned. Those recovering will share their stories with the crowd.

Edinburgh city center will be decorated with purple flowers and ribbons – the color of overdose awareness. Crowds will once again march through the city shouting recovery slogans.

IF YOU ARE GOING TO

What: A community event to remember those who have died of drug overdoses, as well as provide resources and information on recovering from substance use disorder.

Activities: Kickball match between Recover Out Loud members and Edinburgh First Responders, live entertainment from Twisted Tiara and Jim Jam and the Scrim Scrams, food, bounce house, games, resources , testimonials and more. An overdose awareness walk will take place at 7 p.m. in the city and a ceremonial lantern release is scheduled for 10 p.m.

August 25: The public is invited to the Pixy Theater at 6:30 p.m. for a free screening of “The Addict’s Wake,” a documentary about the damage caused by drugs in Brown County. A round table will then take place.

August 31: Overdose Awareness Day, when people are encouraged to share the memories of those who have gone missing on social media, wear purple and raise awareness.

Recover Out Loud: An open meeting takes place in Edinburgh from 6-7 p.m. every Tuesday at the Edinburgh Parks and Recreation building, 722 S. Eisenhower Drive.