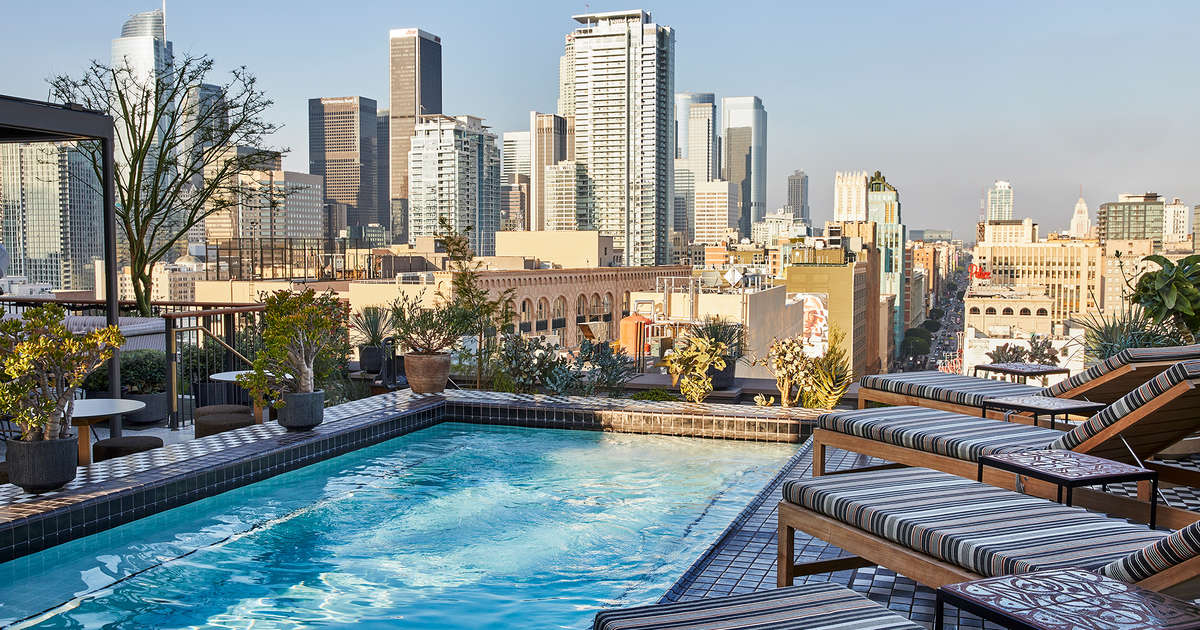 This past October, Proper Hospitality unveiled the latest addition to its growing portfolio of hospitality concepts, Downtown LA Proper. Located in a reimagined iconic building in the heart of downtown South Park next to the Fashion District, the 148-room destination presents the vision of internationally acclaimed designer Kelly Wearstler through a design narrative that blends elements vintage from the property’s historic roots with modern influences to create a hub for local creations. James Beard Foundation award-winning chef Suzanne Goin and restaurateur Caroline Styne bring the culinary program to life in three distinct spaces with the signature Caldo Verde restaurant opening with the hotel in August.

Built by iconic Los Angeles architects Curlett & Beelman in the 1920s, the property was originally a private club whose members included such luminaries as Cecil B. DeMille, and later served as a YWCA in the 1960s. The Kor Group, the LA-based real estate developer led by the visionaries behind Proper Hospitality, and Wearstler reimagine this story with a modern palette, taking inspiration from downtown LA to layer 1920s relics with Spanish elements, Portuguese, Mexican and Moroccan Design. In addition to vintage furniture and rugs, Wearstler uses over 100 different types of hand-painted and custom tile throughout the property, while site-specific murals and installations by local talents such as Judson Studios stained glass and ceramic artist Morgan Peck bring an extra dimension to public spaces.

Deeply residential, each of the rooms and suites is a canvas for selected rooms and specially designed furniture with charcoal and mauve tones imparting depth and warmth. A tribute to his old YWCA life, notable accommodations include the over 1,300 square foot Proper Basketball Court and the over 2,500 square foot Proper Pool Suite with a full-size indoor pool accented by a ceramic mural by local artist Ben Medansky. Comfort and amenities in the Signature Proper room include fine Fili D’oro linens, Aesop bath products, Kelly Wearstler x Parachute Home bathrobes and modern amenities such as Vifa speakers and HDTV streaming with Apple TV .

Food and beverage partners Suzanne Goin and restaurateur Caroline Styne (aoc, Hollywood Bowl Food + Wine, Larder Baking Company) present three new dining experiences at the property. Restaurant and bar on the lobby level, Caldo Verde, is poised to be a focal point within the hotel and the neighborhood, showcasing Goin and Styne’s nuanced and warm approach to hospitality. Open for breakfast, lunch and dinner, the restaurant draws inspiration from Portuguese and Spanish influences, while expressing itself through the prism of Southern California. Plates to share include dishes such as sherry clams, chickpeas and onion flowers; steak with avocado cream and green pepper; and braised carrots with orange, crème fraîche and charmoula. A boutique, esoteric wines from international and national producers and an extensive program of artisan cocktails further reveal the restaurant owners’ inspiration for the program.

In the weeks following the opening of the hotel, Cara Cara, the 5,000-square-foot rooftop restaurant and lounge, with panoramic, unobstructed views of the city, will debut with a menu similarly grounded in multicultural inspirations, including Mexican flavors. Designed to complement the unparalleled rooftop and poolside experience, dishes include local seafood aquachile, seasonal wood-fired focaccias and tacos. Later in the summer, Goin and Styne present Dalia, an intimate, classic ground-floor cocktail lounge and bar showcasing spirits in small batches in fancy presentations.

“There is so much inspiration to be drawn from every pocket of this historic building which also reflects the evolution of DTLA and the awakening of modern times,” say Goin and Styne. “We look forward to serving this vibrant neighborhood where locals and travelers alike, offering dining experiences that tell the tales of our personal stories in Los Angeles, as well as trips abroad. “

Located on the corner of South Broadway and West 11th Street in the South Park neighborhood adjacent to the Fashion District, the property is close to famous cultural spots such as Staples Center, LA Live, Walt Disney Concert Hall, The Music Center, MOCA and The Broad Museum. With its openness, DTLA Proper aspires to be an epicenter of hospitality and cultural experiences within the community.