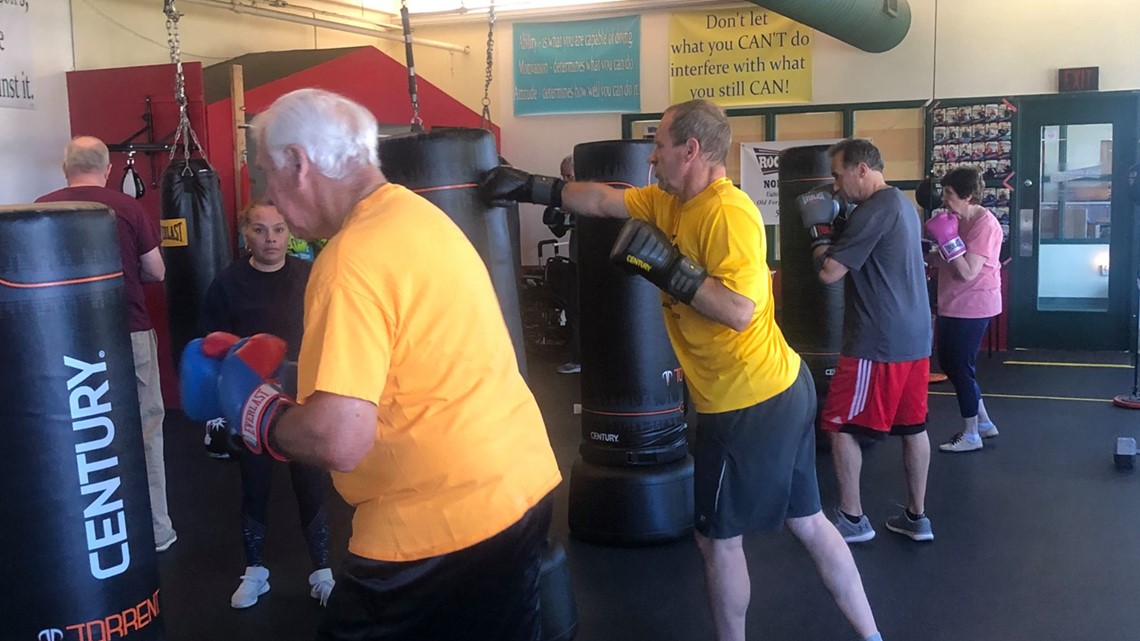 April is Parkinson’s Awareness Month. To help raise awareness of the disease and show the benefits of boxing to help minimize symptoms, check out this free event.

OLD FORGE, Pa. — Parkinson’s disease is considered one of the fastest growing neurological disorders in the world. Although the average age of diagnosis is usually around 60, some people are diagnosed earlier in life. Symptoms can range from tremors to speech and writing difficulties and more.

But health experts say the earlier a person starts a vigorous exercise program, the better their prognosis and quality of life by slowing the progression of this disease.

That’s why an upcoming free event at Rock Steady boxing of NEPA hopes to shine a light on how boxing can improve the life of someone living with Parkinson’s disease.

Rock Steady Boxing offers people with Parkinson’s a way to use a non-contact, boxing-inspired fitness program to help minimize symptoms of the disease.

Rock Steady Boxing works with people of all ages, men and women, at all stages of their Parkinson’s disease.

Rock Steady Boxing NEPA is part of a national program headquartered in Indianapolis.

Newswatch 16’s Ryan Leckey stopped by Old Forge gearing up for the free event this weekend.

Kathy Reap started Rock Steady Boxing of NEPA in August 2016. Kathy has been a physical therapist for 30 years. Her husband, John, was diagnosed with Parkinson’s disease a year and a half ago, which inspired her to start the gym.

Kathy said: “A lot of people think they’re not fit enough to get into a boxing program like ours or the other way around, that they don’t really feel the limiting effects of their Parkinson’s disease yet and they’ve been waiting to get started in. By getting people interested in our workshop with a demo course, they can “try it out” and see how it could benefit them and that there is a course designed specifically for whatever their situation.”

Kathy also thinks that many people with Parkinson’s who may have been quite isolated during this pandemic or who have just been diagnosed are unaware of programs like hers that could help them stay healthy. healthy and active much longer.

If you don’t live in Old Forge, where the free event is taking place, you can find a Rock Steady Boxing affiliate by going to this link and typing in your zip code.

Another ongoing event, as part of Parkinson’s Awareness Month, is related to a fundraising campaign. It’s called Pushups 4 Parkinson’s.

Anyone can participate, and they can do it from the comfort of their own home or gym. On Facebook, Kathy’s team will be posting videos of people doing their 10 push-ups anywhere in the community – at parks, local businesses, etc. We’ll also show people how anyone can do it by demonstrating various modified push-ups that anyone can perform.

How to make a donation :

Log on to www.my1010.org. Participants can register their 10 push-ups, donate $10, and challenge 10 friends or family to do the same. All pumps and donations made to www.my1010.org during the month of April 2022 will be credited towards the efforts of Rock Steady Boxing Northeast PA. Donations will support the local RSB program and the Parkinson’s Foundation.

More programs across the country for patients with Parkinson’s disease:

Click here to learn more about a program developed by a physiotherapist.