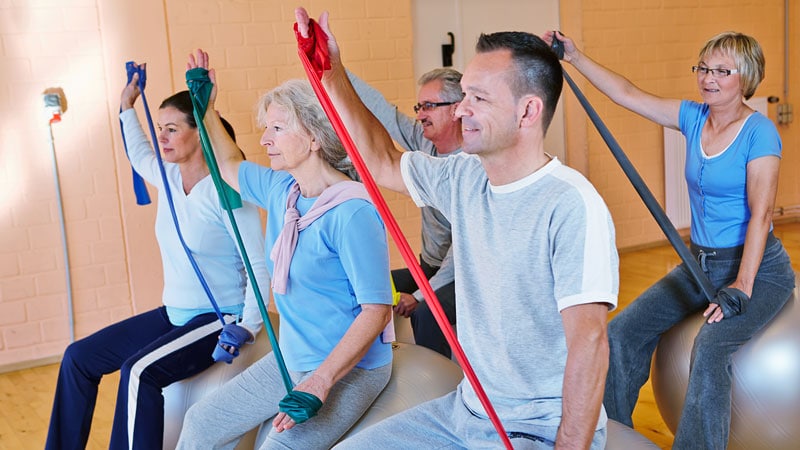 Resistance training (RT) may help improve several symptoms of Parkinson’s disease (PD) – but is not superior to other physical activities, according to new research.

A meta-analysis, which included 18 randomized controlled trials and over 1000 patients with PD, showed that those who underwent RT had significantly greater improvement in motor impairment, muscle strength and mobility/balance than their peers who underwent passive or placebo interventions.

Overall, the findings underscore the importance of these patients participating in some type of physical exercise, said study lead author Romina Gollan, MSc, associate researcher, Division of Medical Psychology, University from Cologne, Germany. Medscape Medical News. “Patients should definitely do exercise, including strength training, if they want to. But the type of exercise is of secondary interest,” she said.

The results were presented at the International Congress on Parkinson’s Disease and Movement Disorders (MDS) 2022.

Previous reviews have suggested that RT has positive effects on motor function in PD. However, the results of the included studies were inconsistent; and few reviews have examined the non-motor outcomes of RT in this population, the researchers note.

After performing a literature search of studies that examined the effects of RT in PD, the researchers included 18 randomized controlled trials in their current review. Among the total 1134 participants, the mean age was 66 years, the mean Hoehn & Yahr stage was 2.3 (range 0 to 4), and the mean duration of PD was 7.5 years.

During RT, participants use their full strength to do one repetition, working their muscles to push past a certain threshold, Gollan said. In contrast, a placebo intervention is “very low intensity” and involves a much lower threshold, she added.

Passive interventions include things like stretching where the stimulus “isn’t high enough for the muscles to adapt” and building strength, Gollan noted.

The review also showed significant but small effects on quality of life.

However, the meta-analysis that evaluated RT versus other physical interventions showed no significant differences between the groups.

Gollan noted that although there were some assessments of cognition and depression, the data were too limited to determine the impact of RT on these outcomes.

“We need more studies, especially randomized controlled trials, to investigate the effects of RT on non-motor outcomes like depression and cognition,” she said.

Co-investigator Ann-Kristin Folkerts, PhD, who leads the University of Cologne Medical Psychology Task Force, noted that although exercise in general is beneficial for patients with PD, the choice of The activity must take into account the preferences of the patients.

It’s important for patients to choose an exercise they like “because otherwise they probably wouldn’t adhere to treatment,” Folkerts said. Medscape Medical News. “It’s important to have fun.”

Specific goals or objectives, such as improving quality of life or balance, should also be considered, she added.

Commenting for Medscape Medical NewsAlice Nieuwboer, PhD, professor in the Department of Rehabilitation Sciences and head of the Neurorehabilitation Research Group at the University of Leuven, Belgium, disagrees that the type of exercise is secondary importance in PD.

“In my opinion, this is of primary interest, especially in the middle and later stages,” said Nieuwboer, who was not involved in the research.

She noted that it’s difficult to perform meta-analyses of RT versus other interventions because studies comparing different types of exercise “are rather sparse.”

“Another issue is that the dose can differ, so you’re comparing apples to pears,” Nieuwboer said.

She agreed that all patients should exercise, as it is “better than no exercise”, and that they should be “free to choose a mode that interests them”.

However, she stressed that exercise requires significant effort from patients with Parkinson’s disease, requires “sustained motivation” and must become a habit. This makes “exercise targeting” very important, with the target changing over the course of the disease, Nieuwboer said.

For example, for a patient with early disease who can still move quite well, RT and endurance training can improve fitness and health; but halfway through, it may be best for patients to work on balance and quality of walking “to anticipate the risk of falls and developing a freeze,” she noted.

Later, as the movements become very difficult, “the exercise menu is even more restricted,” Nieuwboer said.

The bottom line is that a message saying “every move matters” is an oversimplification, she added.

The study was funded by a grant from the German Federal Ministry of Education and Research. Investigators and Nieuwboer have not reported any relevant financial relationship.