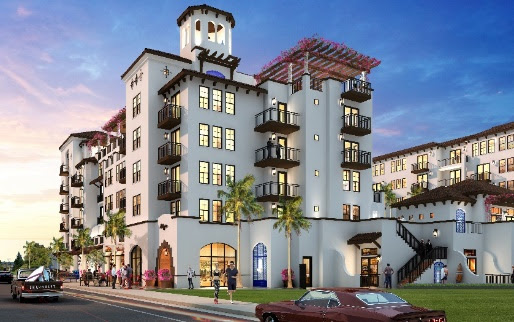 SANTA CRUZ — The Santa Cruz City Council is expected to reject an appeal from a 233-unit apartment development at 130 Center St. on Tuesday, per staff recommendations.

Santa Cruz Tomorrow, led by Gillian Greensite, filed a lawsuit against the Calypso Building shortly after the Planning Commission approved the project in late October.

The appeal centers on what it calls an incomplete traffic study that violates a number of land use and mobility clauses in the city’s general plan. The proposal’s traffic study only looked at weekday traffic.

Calling Santa Cruz Tomorrow notes the heavy traffic typically found on Center Street near Depot Park on weekends, especially during the summer. He hopes to have a categorical exemption from California’s Environmental Quality Act because of the missing study.

“Given the lack of a weekend traffic study, such an exemption is in question,” Santa Cruz Tomorrow wrote in the appeal. “There is a reasonable possibility of a significant effect due to an unusual circumstance, namely the unstudied weekend traffic jam and whether this project has a significant impact, not only due to increased traffic, but also noise pollution and air quality.”

Transport planner Claire Gallogly denied that the project would have a significant impact on excessive weekend traffic, and therefore a weekend study would not be necessary.

“We didn’t ask for those for this place. The main reason is that…this location is an infill location in a traffic area,” she said as the project sought planning commission approval. “The traffic there does not come from the project. On weekends, these conditions do not exist because of this project.

The city supported Gallogly’s statement and concluded that the project was “in accordance with the general plan” and that it had no significant effect on traffic, noise, air or water quality in the area. the region.

In fact, the project’s status as an infill development is why it received the CEQA Categorical Exemption, another aspect of the project that the City supports in its report. The site of the proposed building has already been developed, currently it houses a car rental and a body shop.

The Calypso building is offered over six floors with 233 studios. Units will vary in size, with 78 units considered “micro” at 295 square feet. The most plentiful will be the “extended” units which measure 400 square feet. The building will have 90. Finally, it will have 65 “standard” units of 328 square feet each.

The majority of units will operate at market rate, but the project developer – Santa Cruz-based SWENSON – has included 35 very low-income units at 50% of the region’s median income. The idea is to provide housing for young adults, single professionals and young couples, project manager Jessie Bristow noted when approving the project.

It will also serve as a housing opportunity for UC Santa Cruz and Cabrillo College students.

Greensite is set to win a separate appeal against the city over its wharf master plan. This time with the group Don’t Morph the Wharf!, Santa Cruz County Judge Paul Burdick issued an interim ruling in favor of Don’t Morph the Wharf! December 17. He will make his final decision on February 4.

The Santa Cruz City Council will deliberate on the Calypso appeal Tuesday night at its regular meeting. The item was scheduled for discussion at 6 p.m.

Council meetings remain virtual with the presence of the Omicron variant. Those interested in attending the meeting virtually can do so via Zoom using meeting ID 946 8440 1344. The meeting is also being streamed online at cityofsantacruz.com/allmeetings, communitytv.org/watch and on the Comcast channel 25.

If you are going to