See you later, innovator… Why Rangnick failed at Manchester United 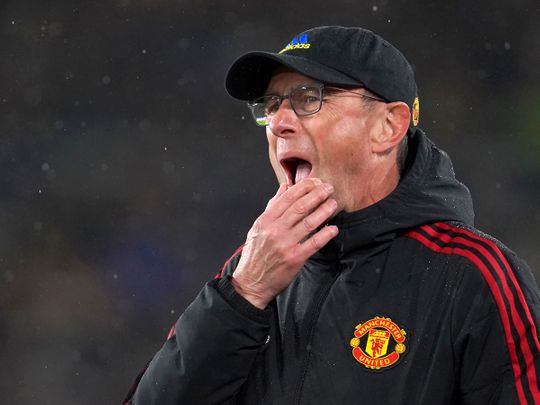 This style of play worked wonderfully at Anfield and Stamford Bridge. He also worked for Rangnick at RB Leipzig where he made a name for himself and for the gegenpress in the Bundesliga. But, he and that failed miserably in the Premier League.

Players couldn’t adapt to the new demands suddenly placed on them and it was clear that many of them just didn’t have the physical shape to do so either. Strangely, Cristiano Ronaldo – who still managed to be their top scorer in a disappointing season – has come under heavy criticism. The 37-year-old was never a pressing monster, not even when he was 27 or younger. But, he is arguably the best player in the world and so many expected him to suddenly transform his style of play to suit the manager’s new outlook. This does not happen. As they say, you can’t teach an old dog new tricks.

Rangnick had to let go of his style of play as he realized the squad he had was not capable of carrying him through. In his defense, he didn’t have a pre-season with the players to help them better understand what was expected of them, and he couldn’t develop physically and raise the level of the team. in the middle of a busy season.

It took Klopp several years and several forays into the transfer market to get the players he needed to implement the pressing style at Liverpool. Rangnick was not given that luxury and as the Reds, Man City and Real Madrid paraded trophies last month, United announced they were severing all ties with their manager.

They finished the campaign 35 points behind Pep Guardiola’s men and with six straight away defeats. We must not forget that United finished second in the Premier League last year. And they signed Ronaldo, the world’s greatest goalscorer. Things looked very rosy last summer, but the team finished this season with their lowest points tally in the Premier League. Football is a fun old game.

Rangnick won’t work as a consultant for the club – as new man Erik ten Hag is opting for a clean slate and will only have his own contribution to the team’s affairs – but he has taken over as new manager from Austria. It’s further proof that you can’t keep a good man, but the experience at United turned out to be one of the strangest chapters in Premier League history.