The Justice Center receives the finishing touches; the police will move in august 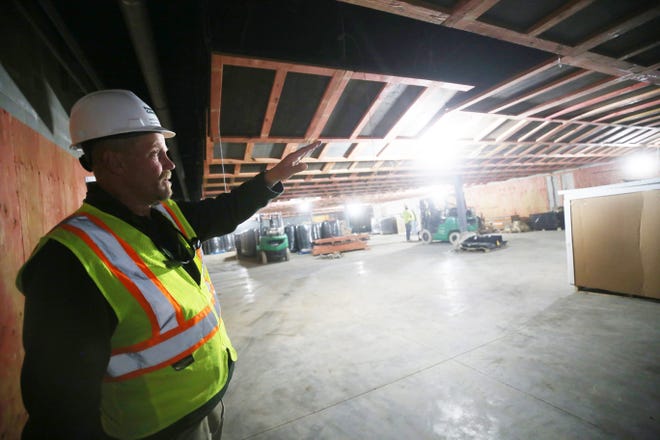 The facility is to allow the entire Westerville Police Division to be under one roof and provide space for community meetings, thanks to Westerville voters’ approval of a bond issue of 0.96 million over 20 years in November 2019.

Adam Maxwell, director of administrative services for Westerville, said equipment, office furniture and technology are expected to move into the building starting July 15, with staff expected to follow on August 15.

The new center is to consolidate all Westerville police offices, including Mayor’s Court, Investigations and Emergency Communications (911), currently located at 21, 28 and 29 S. State St., respectively, in the downtown Westerville.

The Justice Center includes the renovation and expansion of an existing 28,000 square foot 2-story office building into a 60,000 square foot police and justice facility.

According to Pepper Construction, the general contractor.

Westerville Deputy Police Chief Ron McMillin said the division is very excited to move into the new building and bring everything together under one roof.

At the main entrance of the building, there is a clerk’s window in the hall for registration at the mayor’s court.

“The way the building is laid out as you enter the main hall, to the left and right are more or less unsecured parts of the building,” McMillin said.

“There will be secure access. But when we need to open it for public events, we can open this room (mayor’s courtyard) or the other training room to the public. They can come and go without interfering with our normal police operations,” he added.

“Currently, when we have CPA (Citizens Police Academy) or something like that in our training room, we have to let everyone into our secure space. This building and its layout will give us the possibility of having these public meetings without jeopardize the security of the building.

McMillin said the mayor’s courtroom was to be used as a multi-purpose hall for other community events.

“When not in use for court, it will be used for other community events. The Citizen Police Academy will be held there. If there are other city departments that need a larger space, they can come and hold a meeting in this room or in our training room, depending on availability,” McMillin said.

“A track in the ceiling of the mayor’s courtroom allows for a portable wall that can slide down to protect the judge’s bench and provide public space.”

McMillin said the center’s training room will also serve as an emergency operations center in the event of a crisis. “It’s another space we have internally for training and we can also hold trainings externally,” he said.

The center also has a room with a virtual 300 degree simulator. “We can run use-of-force scenarios and de-escalation scenarios and all of those types of scenarios on a virtual screen, using real handguns with blanks and rifles,” McMillin said.

“We can do all of this training right in this room. It’s big enough that we can do that if we need to add a simulator like a driving simulator in the future.”

“It’s a tactical firearm line, which means it’s a very open line,” McMillin said. “There will be no pits up front. It will be wide open so we can run scenarios. It will be 10 lanes wide. The trap will catch all balls at (the end) with a rubber membrane. It is 80 feet long.

“So they did commercial ranges, as well as government and military ranges,” McMillin said.

The center also has two exit ports, providing a secure and controlled entry route to the cell detention facilities.

“We can bring prisoners through the exit port and process them here (a holding area with three cells),” McMillin said.

“Every time we have a court we have to go down to the county jail to pick up the prisoners, bring them here. We will bring them through the exit port and accompany them to court. While they wait, they can sit in the cell instead of in the courtroom as we do now.

The center will also house the division animal control officer.

“What we don’t have in our current building is that there will be a shelter area here,” McMillin said.

There should be a few kennels (along one) wall and a dog wash station, where stray dogs and division dogs can be washed.

“It’s a great feature that we don’t have right now,” McMillin said.

The center will also house communications (911).

“They will have their own bathroom and break room, locker room,” McMillin said. “A lot of times they are at a minimum, so we have to allow them to stay in their space to work.”

He said the second floor will be the investigation office, administration section, men’s and women’s locker rooms and the fitness center.

Blakely said the stone should be delivered for parking this week (end of the week of May 16) and the asphalt will follow.