The upstairs gym gets a makeover – The Simpsonian 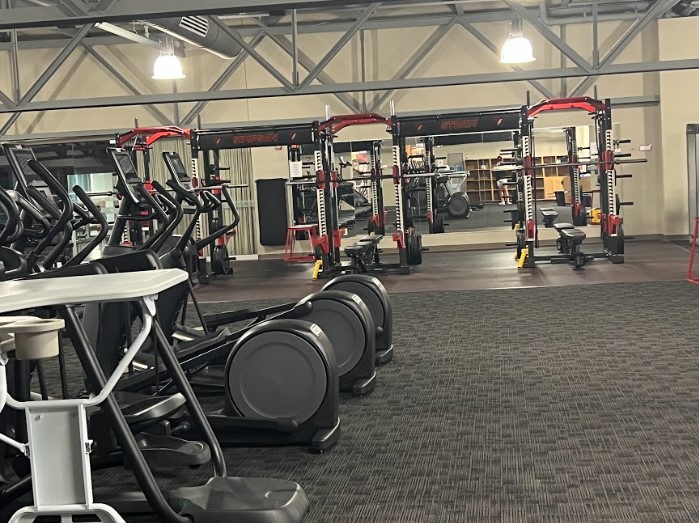 The upstairs weight room updates were considered a hit by athletes and non-athletes alike.

Beginning in the fall 2022 semester, students will see a drastic improvement at the Steven Johnson Fitness Center.

The college installed updated treadmills, ellipticals, rowing machines and exercise bikes, replaced floors and added new weight racks to the top of the gymnasium. The renovations were intended to address spacing and logistical issues students faced in the weight room last year.

The contract the college has with its equipment supplier, Push Pedal Pull Company, expires every four to five years and the last agreement was reached last spring. The expiration allowed the new equipment to be moved upstairs in time to make room for sports teams using the space downstairs.

Schmitz pitched the idea to athletic director Marty Bell, who approved of the idea. The two then sat down with the manager of Push Pedal Pull to work out the new contract.

Junior Qwinton Wilder often uses the gym. “I’m not going down anymore. I like the newer racks better than the ones on the ground floor,” he said.

With all the new exercise racks and equipment allowing more people to work out upstairs, Schmitz noticed that the late afternoon saw an increase in usage. “Those hours when everyone is done with class three through six is ​​when everyone wants to practice,” Schmitz said.

Schmitz strategically chose the location of the racks. “We thought about putting them near the railing, but for safety reasons we just moved the dumbbells to make room for them in front of the mirrors,” he said.

Weight room users would appreciate having the racks near the mirrors.

“I mean for the squat, I like to watch my depth so, yeah, I like mirrors,” Wilder said.

All in all, it seems Schmitz’s idea to add the new racks upstairs was a success.

“As a sports performance coach, I want to see people train. So we’re seeing a lot more people interested in using this stuff, which is our ultimate goal. Schmitz said.