Unsung Santa Cruz: Why one woman’s brainchild could be a game-changer in fitness 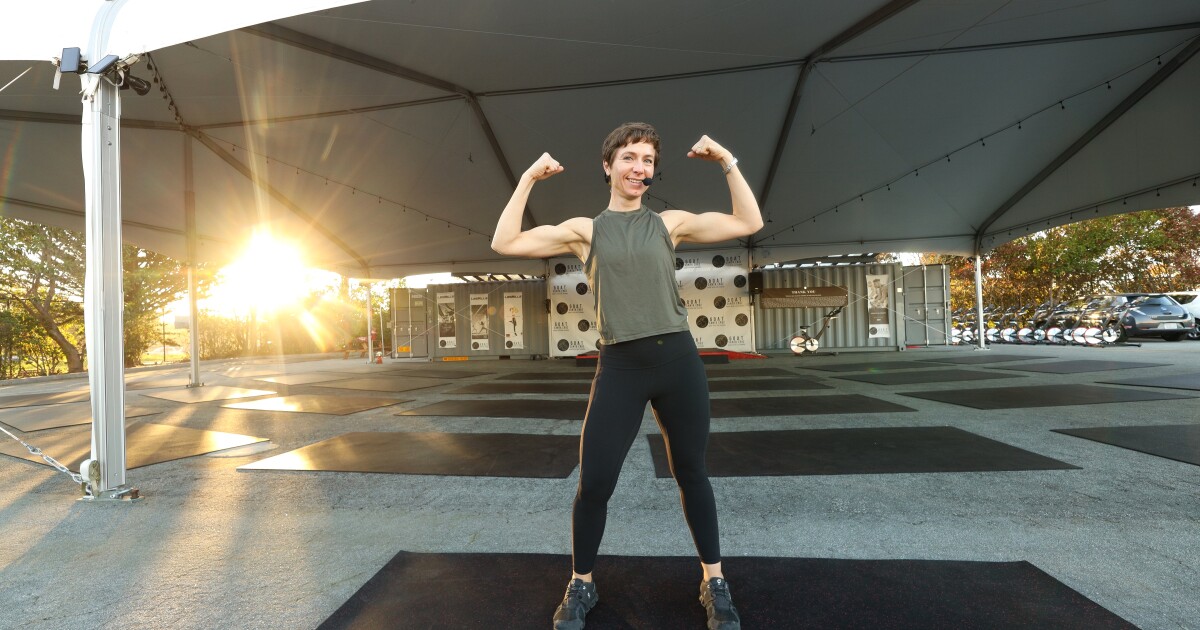 Once upon a time, if you wanted to start a new business, especially one that directly served the public, conventional wisdom dictated that, above all else, you would need a building…you know, with walls?

But that was pre-pandemic thinking. The COVID-19 era has forced many people to think outside the box, even if this box is brick and mortar, and includes air conditioning and indoor plumbing.

Standing firmly outside any box, metaphorical or real, is Natalia Rivera-España de Santa Cruz, the entrepreneur behind a new fitness center called GOAT Santa Cruz. This evocative backyard name is an acronym that many sports fans will recognize as the “greatest of all time.” But, in this case, it means “Group Open Air Training”. This place might as well be called “WWW: Workout Without Walls”.

Located right in the middle of Live Oak, directly across the train tracks from the Simpkins Family Swim Center, GOAT is a fitness center that operates under a large, shaded structure in a parking lot, open on all sides to weather, good or otherwise. It’s a business plan that makes no sense — unless you happen to be experiencing a global pandemic in a temperate climate where it typically approaches 70 degrees in January. In this case, it’s a bit ingenious.

GOAT has been in business for a year and a half, offering a variety of group training classes in strength training, stationary cycling, yoga, martial arts, Pilates, barre, Zumba and TRX (a resistance training technique using anchored straps and a person’s own body weight). A low intensity class for seniors is also part of the class schedule.

There is no membership per se. Classes are priced a la carte, but you can buy in bulk for a discount. Many days classes begin before sunrise and continue well after sunset, with 40-45 classes offered per week.

Natalia Rivera-España, 38, is still a bit stunned to even be in the position of running a small business employing a dozen other fitness instructors. At the time of the pandemic shutdown, Rivera-España was working two jobs, one as a fitness instructor at a local chain fitness center and the other as an emergency technician at Watsonville Hospital.

She has balanced her professional life with her family life with her husband Scott and their pre-teen daughter. She was not, she said, some kind of entrepreneur, nor did she want to be.

If you were to tell me then in March (2020), that you are going to start a business, and I would say, ‘No, you’re kidding! Get out of here!’ It never crossed my mind.

But when the shutdown came, she and many other fitness trainers across the county suddenly found themselves out of work. People used to their regular workouts had nowhere to go. State and county protocols prohibited most types of indoor activities offered by gyms and fitness centers.

But outside? It was a different scenario.

A few weeks after the closure, Rivera-España flashed on the concept of a gym without walls, a “permanent” outdoor training space. Such an idea would be a no-start in much of the rest of the country, vulnerable to blizzards, arctic temperatures, thunderstorms or sweltering heat waves. But in Santa Cruz? Why not?

On top of that, having worked in gym chains, she knew intimately the downsides of indoor fitness training in such facilities: the stuffiness, the crowds, the depersonalization, and the commercialization that characterized many gyms. She wanted something different. At the same time, she knew many fellow instructors who were looking for work. And she was hearing from many people who were desperate for a way to connect and stay in shape during the shutdown.

“You have no idea how many times I would stay up at night and think, ‘Do we do this? Is this a good idea?'” she said.

So, in the summer of 2020, she went looking for a great spot for her outdoor fitness center, designed a business plan and website, took out a loan on her house, bought the equipment and hired the instructors.

“It’s all group exercises,” her husband Scott said. “Group fitness instructors tend to have a following. And no one had a good answer on how to move forward. And then Natalia took it upon herself to put all the pieces together.

Then, having rented the plane and put on the parachute, she had no choice but to take the plunge.

I knew that if I didn’t, I would really regret it. So that’s what made me realize that it was at least worth a try.

“I knew if I didn’t, I would really regret it,” she said. “So that’s what made me realize it was at least worth a try.”

That’s when GOAT was born.

Julie Graff was among those instructors laid off by the pandemic shutdown. She and Natalia had been friends for several years, and Graff jumped at the chance to be one of the first instructors hired at GOAT.

“I could see it in his face,” Graff said. “She just thinks of everything. Natalia is not that person who throws all caution to the wind. I mean, she’s going to do some research. So I knew when she pulled the trigger, it was going to be phenomenal.

The omens, however, were not good at first. GOAT opened in August 2020, just when the CZU fires were ravaging all of Santa Cruz County and it was especially unhealthy to be outdoors breathing in smoky air. . In 2021, exceptionally fierce winds damaged the shade structure. In its first year of operation, it was reminded of exactly what risks put its trust in the hands of Mother Nature.

The Live Oak space is basically just a parking lot. This means that there is no electricity or running water. GOAT has portable toilets and a hand washing station on site. As for power, “well, we have a Nissan Leaf, which is basically just a battery on wheels. So we really plug everything into the car. We have solar panels at home, so we charge the car at home, bring the car here and it stays here for several days. »

Barring fire and high winds, other aspects of the weather created only mild challenges for GOAT instructors and customers. It is sometimes quite chilly early in the morning. Sometimes the rains come.

“Today we had a 6:15 a.m. class this morning,” Natalia told the GOAT site as a cycling class of about 20 people circled behind her. “My car has a low-temperature alarm, and it was cold. But there were 10 of us here. We made it. You know, the way I look at it, if you’re able to go out for a jog, then you can go out for a workout like this, you just put on a few layers and warm up.

Patricia Eggers of Santa Cruz is one of those people who loves workouts but dislikes the gym experience. She stops by the GOAT site at least twice a week, for cycling lessons, TRX workouts and other activities.

She loves the outdoor feel and fresh air that is part of the GOAT experience. But she said the sense of community GOAT has created is even more appealing to her. “There are a lot of members I’ve become friends with,” she said. “It’s pretty nice to chat before and after practice, and sometimes you meet others on the street or in the shops, because the community has grown so big and everyone is so super nice. And you don’t aren’t judged on how you look or how you train.

Julie Graff recently showed up to teach a class to lead a morning class only to unexpectedly find the lead GOAT instructor already at work and leading her own class. “And so I said, ‘My God, did you add another class? And Natalia said, ‘No, I felt so bad. I looked at my 9:30 cycle class and saw that there were 15 people on the waiting list. And I just felt bad that they weren’t going to practice. So she just emailed everyone on the waitlist and took another class.

Today, even as the threat of COVID-19 lingers, the tent structure in the parking lot next to the portable toilets still looks a bit improvised, a bit temporary. What does the long-term picture of GOAT look like?

Natalia Rivera-España has never run her own business before. So this kind of entrepreneurial thinking is all new to her.

“It’s such an interesting question,” she said, wearing a knit cap emblazoned with “GOAT Santa Cruz,” “because the business is growing and you have to make decisions about whether to take longer-term commitments, that’s something I’m struggling with. What will it look like in a year? People might never want to go back to indoor workouts, in general. Even whether it’s COVID or not, they really appreciate that. So this tent will hold up.

For more information on classes, schedules, and prices at GOAT Santa Cruz, visit its website.