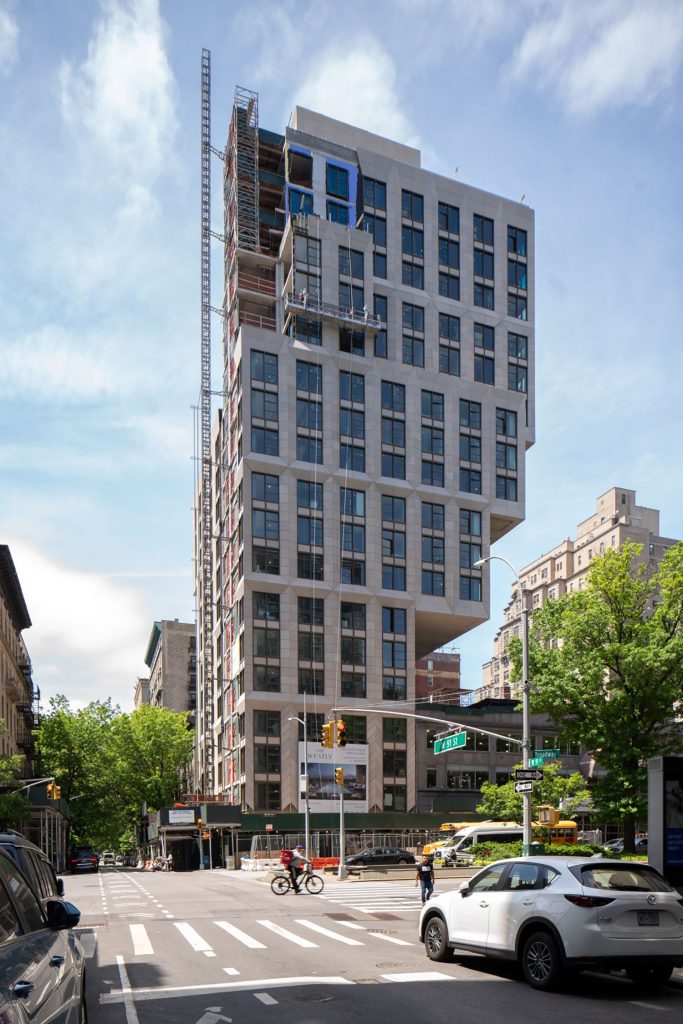 Adam America Real Estate and Northlink Capital, developers of The Westly, a 20-story boutique condo development at 251 West 91st Street on Manhattan’s Upper West Side, today announced a new construction milestone as the building’s limestone facade nears completion. Designed by ODA, the Westly’s limestone facade is composed of staggered geometries stacked in three-story increments, giving a three-height frame and allowing for oversized windows for residents, with most units having a corner orientation.

Herringbone-patterned limestone panels currently surround almost the entire reinforced concrete structure on the north and south sides of The Westly. Punctuating the textured richness of the ubiquitous Upper West Side brownstones, the smooth sheen of limestone stands out with an inimitable quality. As the sun hits the extraordinary facade of The Westly, this iconic New York material dances with the light, reflecting an ever-changing perception of its silhouette.

“We have reached a major construction milestone as we near completion of The Westly’s distinctive Indiana limestone facade etched with staggered chevron geometries and punctuated by oversized windows with polished bronze accents,” said said Omri Sachs, co-founder of Adam America Real Estate. “Sophisticated and romantic, the design theme carries over to The Westly’s interiors, providing buyers with exquisite homes that are airy and bright.”

The Westly offers 52 residences for sale comprised of two- to five-bedroom homes, with select homes offering private outdoor patios. Residences range in size from around 1,252 to 3,524 square feet, with asking prices ranging from around $2.625 million for a two-bedroom home to $13.5 million for a five-bedroom home. SERHANT., the multidimensional real estate brokerage firm founded by Ryan Serhant of Bravo’s Million Dollar Listing New York, handles marketing and sales for The Westly.

Located in one of Manhattan’s most iconic neighborhoods, The Westly is located between Central and Riverside parks. The building is close to notable private schools such as Trinity and Collegiate School, as well as colleges Columbia and Fordham University. The neighborhood offers convenient access to transportation, as well as a wealth of extracurricular activities for families, including entertainment and cultural venues and restaurants.

The Westly is expected to complete construction this summer. For more information, visit www.the-westly.com.