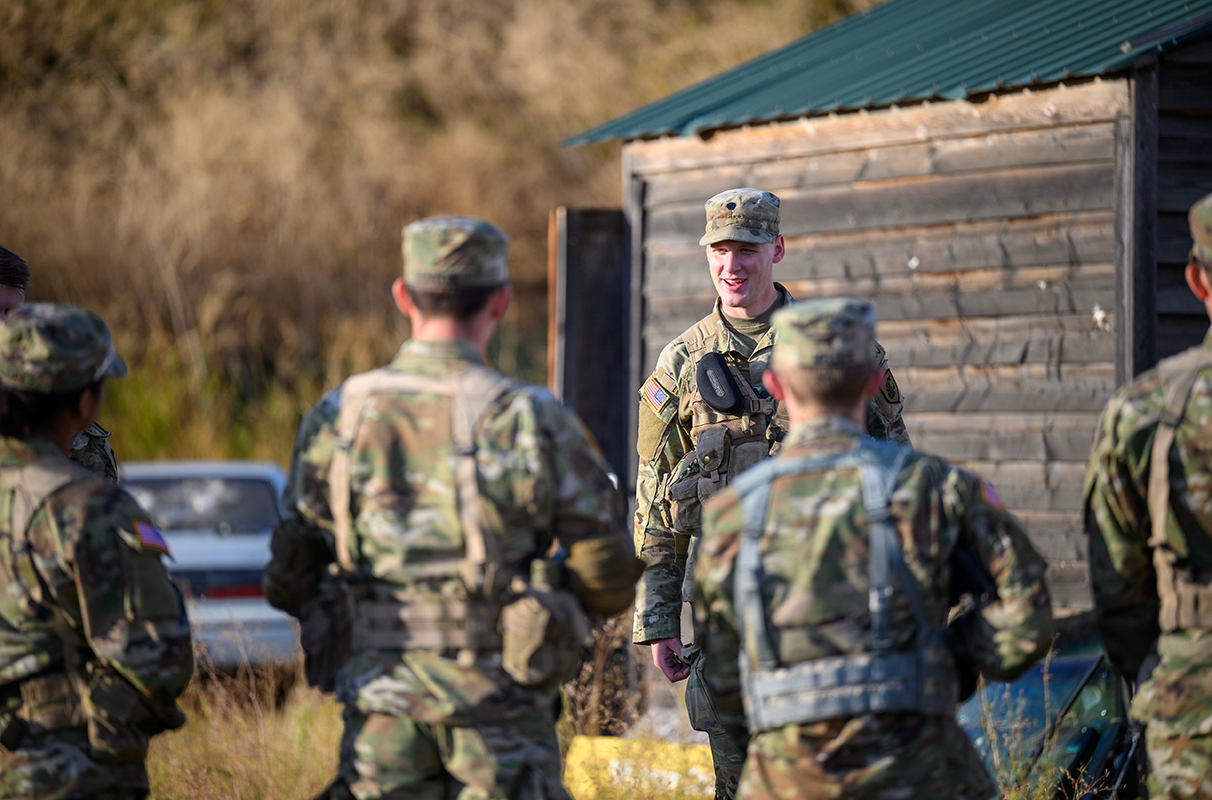 More than an hour before the sun heralds another fall day on the Pullman campus, a group of U.S. Army ROTC cadets gather outside the WSU police station, ready to be tested.

Inside, they are greeted by the team’s trainer, Sergeant First Class Patrick Valkovic, a senior military instructor at WSU, and an accompanying M-249 SAW machine gun. Their mission is to learn the ins and outs of the M-249, which is capable of firing 850 rounds per minute at a speed of 3,000 meters per second.

The cadets fan out, assembling and disassembling the weapons with a rough goal of completing their task in three minutes. The cacophony of metal hitting metal quickly envelops the space, as cadets strive to set personal bests or assist teammates in the most demanding parts of the project.

Last year, WSU’s Ranger Challenge team finished second among the 10 schools that make up the U.S. Army’s 8 ROTCe brigade, Task Force East. The group spans as far north as Alaska and as far south as California, with schools in Washington, Idaho, Montana and Nevada included.

The WSU team failed to advance to the national stage of the competition. And as they seek to change that this year, Smith’s goal is to help fellow cadets achieve their military goals and ignite a passion for the program in them.

“I love the group we’ve put together,” Smith said, adding that the biggest lesson he learned as a member of the team last year was that camaraderie is as important a measure as any. something else in team building. He continued: “I would rather have this group than a group of nine Olympic athletes who don’t want to be here, don’t get along and don’t want to work hard.”

WSU Army ROTC has the added benefit this year of being the local team, hosting its counterparts from nearly a dozen area schools Nov. 4-6. Midway through the regional competition, teams will undertake a 14-mile march with 35-pound backpacks on their backs, traveling from Martin Stadium to the University of Idaho campus, where they will be picked up and transported to Camp Grizzly for the home stretch. of the competition.

Each Ranger Challenge team consists of nine cadets and two alternates. At WSU, members range from sophomores to seniors. Some, like third-year criminal justice and two-time history major Andrew Dixon, came to WSU as an ROTC cadet in part to help pay for that training.

“In high school, I was looking for ways to pay for my college education and was lucky enough to get 3-year scholarships, which my parents were very excited about,” Dixon said.

Others, like Smith, joined after arriving at WSU because they found the program a place to pursue their career ambitions and goals.

“I had an image in my head of a bunch of 100 absolute badass people going out every morning, so I wanted to practice and make sure I was competent enough to show up,” said Smith.

Many team members saw the Ranger Challenge as an opportunity to test themselves beyond what was required in the ROTC program. It also gave them the chance to be part of a team similar to the ones they participated in in high school. The team includes former college baseball, track and field and cross country players.

Each weekday, the team meets at 5am to practice the skills that will be tested in the Ranger Challenge. Some days it’s weightlifting or swimming at the Student Recreation Center, others its tactical challenges like nocturnal exfiltration and reconnaissance at the WSU Arboretum.

The US Army ROTC program at WSU, known as the Cougar Battalion, has been part of the Pullman campus for over 100 years. With provost support, Cougar Battalion has been able to conduct its training courses and exercises throughout the pandemic, sometimes remotely or with the assistance of personal protective equipment.

Recruitment challenges brought on by the pandemic have pushed the number of enrolled cadets below average, although its current strength of 115 is approaching pre-pandemic levels, said Lt. Col. Matt Sheftic, who leads the battalion and is a professor of military science at WSU.

“Last year was relatively normal, albeit with masks on occasion, but we saw our cadets go out and get their shots and that got us back to a sense of normalcy,” Sheftic said.

The first time is the charm

After their morning spent with machine guns, WSU’s Ranger Challenge team joins the rest of the Cougar Battalion in training with the standard US Army M4 carbine at the Whitman County Range. Cadets are quizzed on the basics of range safety before being instructed to fire a series of group shots with their rifles.

This is the first time that sophomore biochemistry student Makena Spohr has fired a gun, let alone an M4. Spohr, one of two female members of the team, manages to qualify for the first time on the shooting range, putting shots in an impressive group on the paper target.

Spohr saw ROTC as a great way to pursue his goal of becoming a doctor. She plans to fall behind academically from her required military service to enter medical school and join the Army Medical Corps.

Initially, she was unaware that she was being recruited to join the Ranger Challenge team.

“Caddy Thomas invited me to train with the team, and by the time I realized it was a try-and-cut team, I wasn’t about to to go back,” Spohr said. “I kept going, I kept pushing and Thomas was always supporting me.”

She excelled and even joined the long walks dressed in extra weights, having spent much of her childhood hiking near her home in northern Nevada. The tactical tests were demanding for the new WSU student, but throughout the course, her teammates were there to lend their expertise.

“I heard a lot of people say that with the group trying, whoever made the team, it was going to be a good team, which was reassuring,” Spohr said. “I’m super excited, and I think we’re going to do well.”